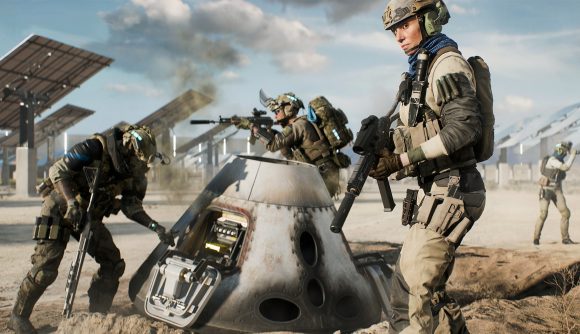 Last week, EA finally pulled back the curtain on Battlefield 2042’s new high stakes, retrieve and extract game mode called Hazard Zone, which is set to take place across all seven of All-Out Warfare’s maps. However, after it was confirmed that the new mode would be limited to eight or six squads, depending on your platform, some fans questioned the viability of playing on maps built for Conquest.

After reaching out to EA for clarification, the Battlefield 2042 team has confirmed to The Loadout that the seven maps will not be full-sized in Hazard Zone and will be tailored to the smaller player count. This is in a similar fashion to how map sizes are reduced in the PS4 and Xbox One versions of the game to cater to smaller player counts in All-Out Warfare.

With match duration lasting no longer than 20 minutes, according to Battlefield 2042 producer Amo Mostofi and design director Daniel Berlin, many speculated that players would be dropping into smaller sections of the core maps. With this confirmation, we now know for sure that entire maps will not be playable in Hazard Zone.

However, despite the clarification, it’s still unclear exactly how big the playable area in Hazard Zone will be, and which sections of each map will be carved out.

While engagements with other teams will still be far less frequent as they will be in All-Out Warfare, the news that Hazard Zone maps will be cut to size for Hazard Zone suggests they might not be quite as scarce as some believed following last week’s full reveal.

When Battlefield 2042 launches on November 19, it will be interesting to see which sections of each map have been chosen for Hazard Zone, and how the mode will feel in these smaller areas.