The AK-24 is an old, but reliable weapon in Battlefield 2042. The assault rifle isn’t as versatile as some of the guns utilised by the No-Pats in this futuristic warzone, but it can be devastating in the right hands. If you’re looking to make an impact in All-Out Warfare – or even Hazard Zone – you might want to consider using the best AK-24 Battlefield 2042 loadout.

That’s because, despite having a slower fire rate than the best M5A3 Battlefield 2042 loadout, the AK-24’s damage output is much higher. Sure, the recoil is a bit more difficult to manage, but with the right attachments, it’s easily one of the best Battlefield 2042 guns.

If we’ve piqued your interest, read on for the best AK-24 Battlefield 2042 loadout, complete with the attachments, gadgets, and specialists you’ll want to pair up with this old reliable to give you the edge online.

The AK-24 is at its best when built with medium engagements in mind. These attachments, which form the basis of our best AK-24 Battlefield 2042 loadout, should have you perfectly optimised to take – and defend – multiple objectives across the Battlefield 2042 maps.

For the sight, we’ve chosen the Bravo 3x scope as it’s perfect for fighting enemies at range, especially those sat in the hills in Orbital. Fusion Holo is a great option for your Plus menu, as it allows you to have a scope for close-quarters combat – perfect if you need to clear out buildings.

For the barrel, we’ve opted for the Warhawk Compensator which helps with recoil control. You can have a suppressor on your Plus Menu if you’d like, but the Warhawk should be your default.

The Standard Issue / Drum Mag is our default option for ammunition, as it gives you plenty of ammunition to play with. High-Power rounds are a great secondary option since this boosts the firepower of the AK-24.

The Cobra Grip is our choice for the fourth slot, simply because it helps control the AK-24’s recoil – which at times, can be unmanageable. 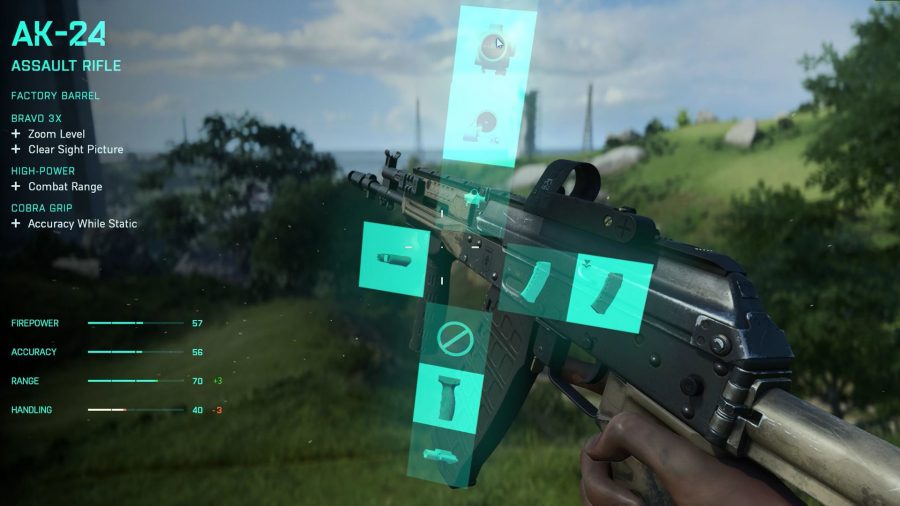 As the AK-24 is a slow firing rifle, you’ll want to think long and hard about what gadget you’re going to pair up with the gun. Of course, there are plenty of gadgets to pick from – and what you choose might depend on the roles of your squad – but for this, we’d recommend the IBA Armour Plate.

This will give you a bit more protection in the field, which is handy if you end up on facing the barrel of our best K30 Battlefield 2042 loadout.

As for which soldier to pick, you’ve got plenty of options. Currently there are ten Battlefield 2042 specialists in the game, each with their own traits and gadgets. Specialists these days aren’t tied to class, so you can use whoever you please when you play.

However, for the best AK-24 Battlefield 2042 loadout, we’d recommend playing as one of two specialists: Boris and Irish.

Boris comes with an SG-36 Sentry System which will automatically spot and engage enemies within a certain area and Irish’s Veteran trait will give you a bit more armour to play with. These are the best options if you’re looking to take the fight to the enemy with an AK-24 loadout.

So there you have it, our best AK-24 Battlefield 2042 loadout. As you can see, the assault rifle can swing the tides in your favour with the right attachments.