There’s nothing better than strolling into an objective in a competitive FPS game and obliterating the defenders in front of you with a trusty submachine gun. In Battlefield 2042, that’s no different and many are turning to the best K30 Battlefield 2042 loadout to get the job done.

The K30 is basically the Vector Kriss Gen II – a fast-firing beast of a weapon – that is built for short-range engagements. The gun can take down multiple enemies in one single burst, but its effectiveness is reduced over range. In other words, it’s perfect if you’re looking to clear out buildings, but less so if you’re on the top of a huge skyscraper.

But with such a high-rate of fire and a high recoil rate, how do you create the best K30 Battlefield 2042 loadout? Here’s our pick of the best attachments, gadgets, and specialists that’ll help you get the job done in All Out Warfare and Hazard Zone.

If you’re planning on playing nothing but the objective, this K30 Battlefield 2042 loadout is a good option for you. This fast-firing SMG is deadly in the right hands, giving you all the tools you need to disrupt enemy controlled points, without having to rely on those around you.

Since the K30 is built for fast-paced close quarters action, it’s very much a situational gun. If you get caught in long-range battles, you’re probably going to come out on the losing side, so make sure you’re only using this where close-quarters engagements are viable.

The K8 Holo provides a decent picture of the terrain in front of you. A slightly longer range scope, like the Bravo 3x is a good option to have on your Plus Menu – it just comes down to how much vision you want in fights to which one you use.

In the barrel department, we’ve opted for the Tactical Compensator because it improves horizonal recoil control both when you’re on the move and static. If you’re looking to stay quiet, we’d recommend the 6KU Suppressor as your secondary.

We’ve also opted for the Standard Issue / Drum Mag as you’ll run out of rounds quick. The Drum Mag not only increases your mag size, it improves your recoil control, reload speed, and rate of fire.

Finally, the Cobra Grip takes up our last slot as it improves static accuracy by 20% and range by 5%. The K30 has a particularly frustrating recoil pattern, but the grip helps you keep that under control. 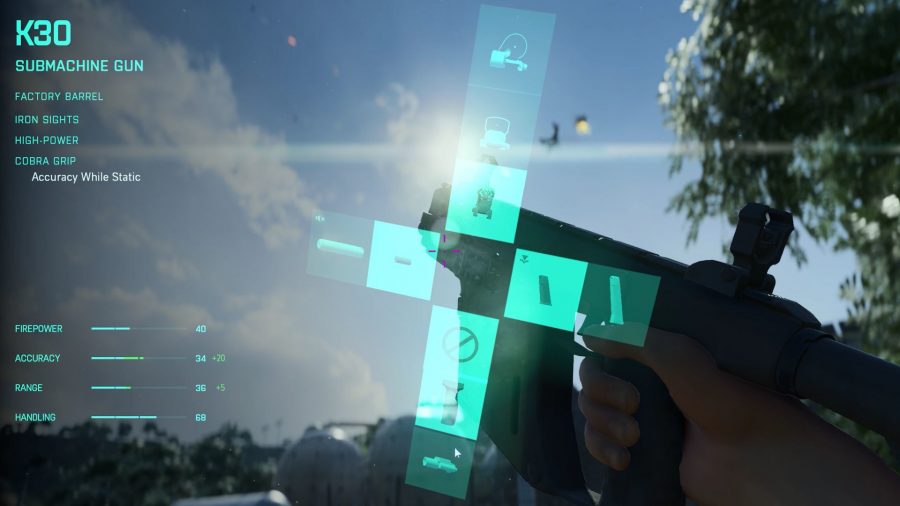 The K30 has an incredibly high rate of fire. As such, you’re going to burn through a lot of ammo. If you’ve not got a dependable squad who can keep you topped up, we’d recommend picking the Ammo Crate as your gadget for this loadout.

If you have a good squad, though, picking the Medical Crate isn’t a bad option – especially since this class is designed to get you up, close, and personal with your enemies.

There are ten Battlefield 2042 specialists to pick from and you’ll be pleased to know there are a couple suited to the best K30 Battlefield 2042 loadout. To get the most out of this class, we’d recommend picking MacKay, Dozer, or Sundance.

MacKay’s grappling hook is particularly useful if you’re looking for the height advantage to surprise your enemies, as is his Nimble trait. Dozer’s Blast Resistant trait will boost your resistance to explosives in the field, and Sundance’s Smart Explosives and Wingsuit are perfect for players constantly planning their next step.

Of course, any specialist can be used with this loadout, but try to pick someone whose skills will complement the speed and power of the K30.