Are you looking for a no-frills assault rifle that’ll do the job you need it to? Well the best M5A3 Battlefield 2042 loadout is for you. This MCX variant rifle is a solid choice for those looking to dominate in All-Out Warfare and Hazard Zone due to the versatility of the gun and its attachments.

The rifle is geared for medium to long-range engagements, but with the right attachments, it can be turned into a short-range beast rivalled only by only a handful of submachine guns. While it might not be the fastest firing weapon in Battlefield 2042, it’s one of the most reliable, with manageable recoil and decent damage output.

But what is the best M5A3 Battlefield 2042 loadout and what attachments should you have on your Plus menu? Well, you’re about to find out. Here are the best attachments, gadgets, and specialists that you’ll need to control objectives and rack up some kills.

If you’re looking for a great all-rounder that you can adapt on the fly to suit your medium to long-range engagements and your close-quarter clear outs, then we have the gun for you. The best M5A3 Battlefield 2042 loadout is one of the most versatile options out there, nabbing a spot on our best Battlefield 2042 guns guide.

But how do you set it up? Well, first things first, you’re going to need a scope – the 8R Holo to be exact. This clear holographic sight will give you a good picture of the battle ahead, while giving you a 1.5x zoom. As a second option, the Bravo 3x scope is great if you need something to help with long-range fights.

In the barrel department, you’ve got two a couple of options, but the the Extended Barrel should be your go to as it’ll increase bullet velocity – something that’s particularly useful if you’re fighting at range. The Shortened Barrel is a good option to have on your Plus Menu if you’re looking to switch to close quarters. 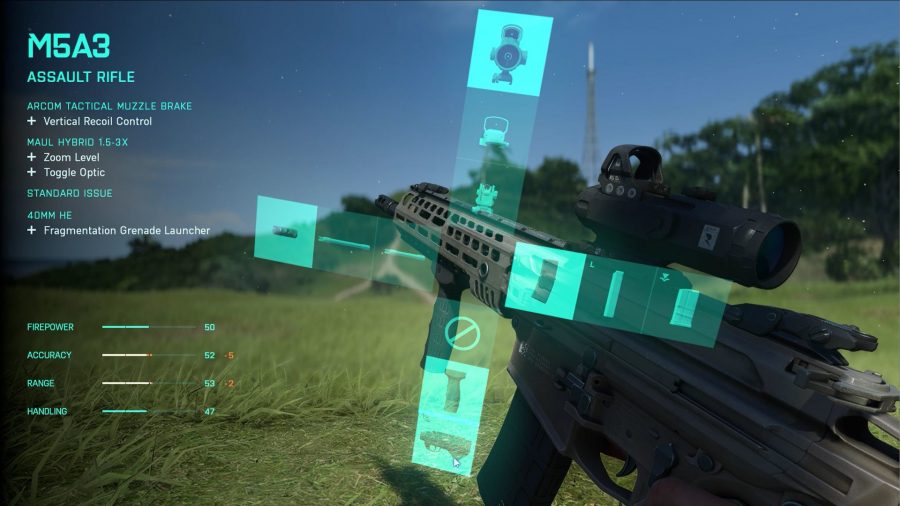 As for the ammo, we’ve opted for the Standard Issue / Extended Mag since it doesn’t hurt to have extra rounds. The High-Power mag is a great option too since it boosts firepower, accuracy, and range by 5% each, while reducing the handling by 10%. This attachment is particularly useful if you’re surrounded by enemies and you need every shot you fire to count.

The Cobra Grip helps us round out the loadout, increasing the gun’s accuracy and range. You can run the 40MM HE Grenade Launcher on your Plus Menu, which’ll give you a bit of extra firepower online.

If you want to make an impact in Battlefield 2042, you’re going to want to stay alive for as long as possible. While all the gadgets in the game are viable options for this M5A3 Battlefield 2042 loadout, we’d advise picking the IBA Armour Plate as your gadget.

This will allow you to reinforce your armour heading into engagements, making you a bit tankier before the fighting begins.

DICE is tearing up the playbook for Battlefield 2042 this year, and instead of classes, we’re getting Battlefield 2042 specialists. These operators all have specific traits and specialists that give them an edge online, and while all are viable picks, there’s a couple that really stand out for this build.

The best specialists for the M5A3 Battlefield 2042 loadout are Sundance, Irish, and MacKay.

Sundance’s Smart Explosives and Wingsuit make them a perfect assault-based specialist, Irish’s Veteran trait allows you to protect yourself with additional armour, and MacKay’s Grappling Hook will get you to places your enemies won’t expect.

So there you have it, our best M5A3 Battlefield 2042 loadout. This nifty weapon is one of the best Battlefield 2042 guns in the game, so make sure you spend time setting up your Plus menu before you dive into a game.