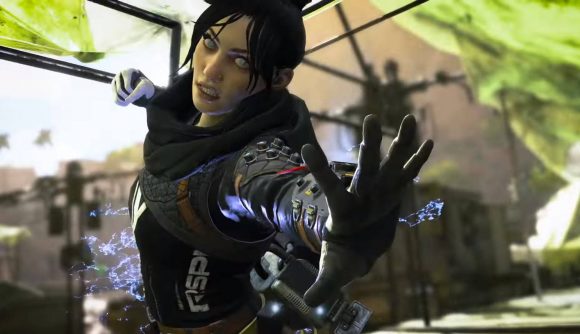 Wraith is no longer the most popular option for Apex Legends players, according to Respawn’s lead game designer Daniel Klein. The interdimensional skirmisher has been a top-tier legend since the game released two years ago, but a recent hitbox nerf seems to be putting players off.

Wraith’s abilities allow her to teleport short distances and create portals for teammates to jump through, which are undoubtedly a powerful tool in the right hands. However, Respawn increased the size of her hitbox in Season 8, which seems to have impacted her usability. While she retained the Low Profile ability that makes her harder to hit, this seems to be a change too far for many players.

While she still looks very strong (and retains her spot at the top of our Apex Legends tier list), being easier to hit can make a big difference in a firefight. Even a slight increase to her hitbox could prove devastating to her usefulness – as Pathfinder mains found out when his was nerfed last year. However, as Wraith’s abilities so far remain unchanged, which was not the case for Pathy, we don’t expect her fall from grace to be quite as dramatic as the loveable robot’s.

Klein reveals data regarding how often Wraith is picked by players in a reply to a Reddit thread, in which he also explains Caustic’s steady increase in popularity. “Wraith went from highest [pick rate], where she’d been for pretty much all of Apex’s existence, to fourth highest,” he says. Caustic has risen to the fifth-most picked legend.

The difference was also noticeable during the Apex Legends Global Series Winter Circuit 2 tournament that took place this weekend, where Wraith – who usually appears in every single team – was noticeably absent from a few rosters. However, the North American kills leaderboard still showed that Wraith remains in a strong position, as CLG’s Ryan ‘ImMadness’ Schlieve utilised her abilities to make an impressive 19 kills over the course of the tournament – more than any other player.

Despite pleas from many players on Reddit to leave Caustic in a strong position, it seems that many pro players don’t like the toxic scientist’s rise to power. When The Loadout chatted with Winter Circuit 1 winners Mikkel, Can, & Dan they told us that they would “rather lose tournaments than play Caustic,” due to his passive playstyle.

Whether you’re Team Caustic or Team Wraith, Season 8 is already shaking up the Apex Legends meta at every level, and we can only see more shakeups in the game’s future. However, Caustic mains may need to make the most of his newfound glory, as Klein says that Respawn will “take a swing at nerfing him next patch.”