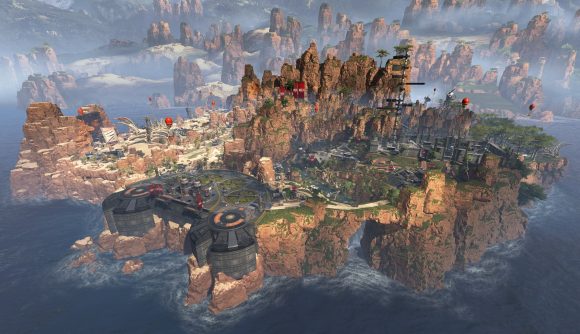 While many players will be drooling over the prospect of a new legend and vehicles in Apex Legends Season 7, competitive-minded players will be keeping an ear out for any changes coming to ranked mode. Well, the biggest is that the game’s OG map, Kings Canyon, will be booted out of competitive mode this season in favour of the brand new map Olympus.

Season 6 saw both Kings Canyon and World’s Edge used in competitive play, with the season split in half to allow a fair share of time on both maps. That same system will again carry over into the next ranked season, but Kings Canyon is going to be dropped to make way for the “beautiful, lush city in the clouds” that is Olympus. Don’t worry though, it will return in a later season.

Interestingly, Ranked Season 7 will see Olympus as the first map in rotation, meaning players will have to get to grips with new locations and strategies fast. Season 7 drops in Apex Legends on November 4.

The mid-season reset and map swap over to World’s Edge is slated for December 15.

With a brand new map to contend with straight away, the early race to Apex Predator in the Apex Legends ranks will be an interesting one.

In its end of Season 6 update outlining the ranked map changes, Respawn also reveals some of the rank distribution from the current season. As is often the case, Gold was the most common top rank with just over a third of players hitting it. Meanwhile, just 0.12% of the player base managed to reach Master or Apex Predator.

Let’s see whether the new map can shake that up come the end of Season 7.