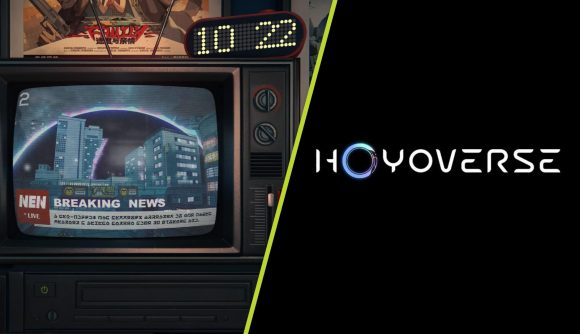 Genshin Impact isn’t even two years old yet and HoYoverse are set to announce their third game since its JRPG made a seismic impact on PS4 and PC. Zenless Zone Zero is rumoured to be the name of the Japanese developer’s FPS, which is set to be revealed this Friday!

Officially teased via a teaser website, very little is known about the game. However, industry analyst, Daniel Ahmad, has stated on Twitter that it will follow miHoYo’s ACGN (anime, comics, games, novel) aesthetic, which isn’t too surprising.

Small teases for the game appear when the clock above the TV on the teaser website counts down to 0. However, given that the game will be revealed on Friday in Japan, those of us in Europe will get a glimpse of the game early Friday morning, while US folk will likely be able to catch the reveal late in the evening on Thursday.

As for what Zenless Zone Zero will look like and play like, we just don’t know yet. Although the game appears to have a more cyberpunk, urban look compared to the fantasy world of Genshin Impact.

Despite extending Genshin Impact banner 2.6, in the wake of banner 2.7 getting delayed, the studio is slowly building out its own HoYoVerse of titles that fans are captivated by, with Honkai Star Rail, a turn-based RPG, set to release soon on PC and mobile devices.

As for Zenless Zone Zero, the release date for the game could be still a while away. But, we will have to wait until Friday to find out.