VENN finds itself in a really unique position in today’s media landscape. It’s a coming together of high-production value, 24/7 cable television and the ever-growing livestreaming industry.

Experienced names behind the scenes have manoeuvred VENN into this niche spot between these two massive forms of media and entertainment, so it’s no surprise that it was met with a mixture of intrigue, excitement, and some doubt when it was announced. While programming is currently limited, the early signs are looking positive. Shows such as Dare Package with Twitch streamer ‘AustinShow’ have seen decent viewership, while the network’s chat shows have attracted a surprisingly high calibre of celebrity guests.

But where’s VENN headed to? Its daily news and discussion show, The Download, sets out the network’s stall for what it wants to cover both now and in the future with its programming. While the impetus is on gaming and livestreaming, splashes of popular culture are thrown into the mix as well.

For one of The Download’s panelists, this a pretty big change of pace from what he’s most widely known for. Matt ‘Mr X’ Morello, a stalwart in the esports scene and caster for the Overwatch League, had a chat with The Loaodut about this “refreshing” new opportunity, working to bring more esports coverage to the network, and how VENN can elevate the planet’s biggest streamers to new levels.

The Loadout: When you were first approached to join the team at VENN, what were your first thoughts about the project? Were there any doubts?

Matt ‘Mr X’ Morello: When I first got approached to work on The Download I was first of all really impressed with the team they had put together to work on all of the shows and the network. The level of experience everybody had was really tremendous.

Also, their overall vision and plan for the network sat well with me in terms of like, where they were going and where they wanted to end up.

The Download is a type of a show that I’ve always wanted to be a part of. Something that’s news driven, but also opinion driven as well. A place where I can work with people from all different backgrounds, not necessarily just esports.

TL: So you’re enjoying being able to branch out and talk about something other than esports?

Venn actually has a plan for 24/7 coverage, not just the tagline

MM: Yeah, it’s actually awesome. It’s quite refreshing. I think a lot of people who are in my position kind of go deep into esports, with analytics and that kind of stuff. But really, we all started with the love of just games in general, right? Like, I didn’t just buy a console and say ‘I’m gonna play esports.’ I got into it to just play games. So it’s quite refreshing to be able to go back and talk about different console releases, new games coming out, stuff that I’m genuinely interested in anyway, but just didn’t really have an appropriate place to speak about it before. So I think in regards to that it’s been a tonne of fun.

TL: While esports conversations crop up on The Download, there’s no dedicated esports programming just yet. Is that an area you hope VENN expands into soon?

MM: I would definitely love to see more esports content as somebody who’s been involved in esports since the early stages. We’re talking as far back as the MLG Pro Circuit way back in the day, like 2006, 2007, so I’ve seen it grow all the way to this point. 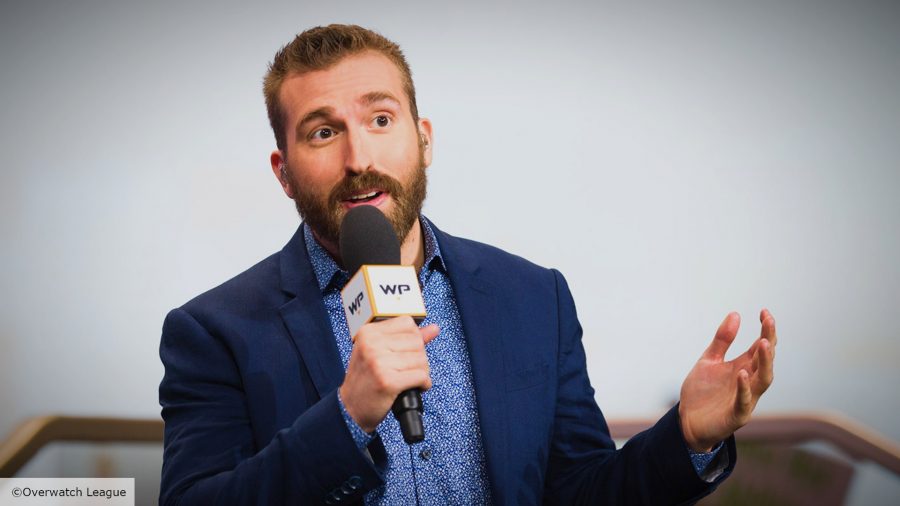 TL: One of VENN’s big focuses at the minute is taking already big streamers and giving them a more professional platform to do what they do. What are your thoughts on this strategy?

MM: Very early on it was clear that VENN’s strategy is ‘Hey, we want to elevate streaming,’ and part of that is taking what streamers are already doing but just bring it to another level. I think you look at AustinShow as a perfect example, like his shows on Twitch have existed and succeeded on their own. But now with all the added production value and all the extra support that VENN can give him, you can make it that much better. It’s exciting to see.

TL: VENN is in a pretty unique place right now. Do you think this merging of TV and livestreaming, which never takes a break, can catch on and succeed in the future?

MM: Yeah, for sure. I mean, a 24/7 channel is something that’s never really been done in livestreaming, right? But I think it’s in a place where it can grow and adapt. That’s something that’s also kind of drew me in as well is that it’s one thing to kind of have the vision of ‘Oh, let’s go 24 hours,’ but you have to have the plan in place to back that up. VENN actually has a plan for 24/7 coverage, not just the tagline.