When Riot introduced the new Valorant account level system on patch 3.0, players were retroactively awarded Account Points (AP) based on the amount of time they had piled into the game during its inaugural year.

However, a number of players – some with hundreds of hours of playtime – have since reported that the system didn’t award them nearly enough points. Towards the end of last month, a Reddit thread highlighted the issue, with a number of long-time players stating that they were only granted a few paltry levels when they initially logged in.

The Valorant level bug has not gone unnoticed by Riot, however, with the studio stating in the 3.01 patch notes that it has now resolved the issue. Additionally, players impacted by the bug will retain all of the AP they have gained while playing at the wrong level – so get ready for a sizable level boost.

Below is a quick reminder of the in-game player card rewards you can snag from levelling up your account. 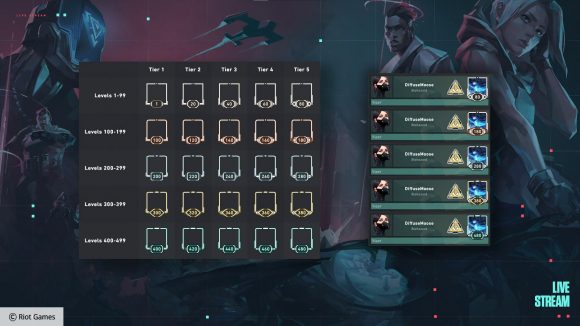 Although this patch might not be super chunky, it’s to be expected considering the size of the Episode 3, Act 1 mega-patch. With the Ruination event dropping imminently, Riot has also today revealed its shiny new Valorant skins – in conjunction with HITSCAN – to mark the occasion. You can check out the video here.