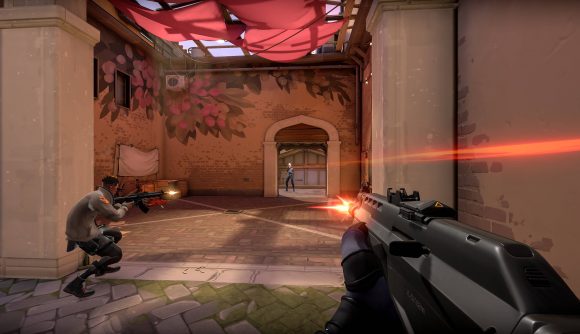 Toxicity is, unfortunately, attracted to competitive FPS games like bees to honey, and Valorant is no exception. When it comes to communicating with other players, while there are great experiences to be had, sometimes things get more than a little heated. The shooter already offers options to mute voice and text comms, but now on Valorant patch 4.01 developer Riot Games is getting more granular with its measures.

As of the new patch, Riot announced that a ‘Muted Words List’ has been added to the settings. Here, players can add not only specific words that have been directed their way so they will no longer appear in text chat, but variations as well. The studio’s example is muting ‘Riot’, as well as ‘R!ot’, ‘R!0t’, and ‘Ri0t’.

By cross-examining player lists from all over the world, Riot says the new feature will allow it to improve its own detection algorithms, as it admits that players’ creativity in how they type their choice phrase(s) often outwits the system. Smart.

The new system will hopefully allow players to continue using text chat for productive comms, without being cussed out by unruly teammates or particularly tilted opponents. While the measure won’t stop players from being toxic, it will at least help mitigate the impact on others.

Elsewhere in the Valorant patch notes, the Ares has received a well-deserved nerf, while the melee changes originally set to drop on patch 4.0 have finally gone live.