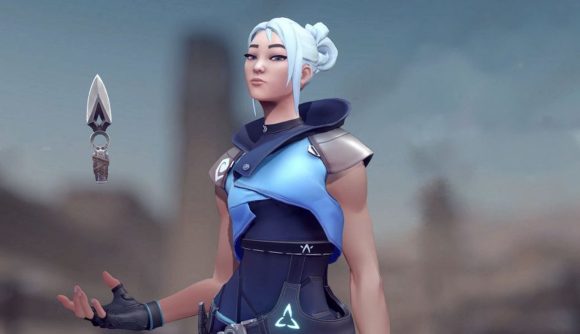 There are three certainties in life: death, taxes, and someone instalocking Jett in your Valorant ranked game. With the floaty duelist remaining the most popular pick in Platinum and above, according to Valorbuff, the resulting fallout when other Jett mains can’t get their mitts on her can become toxic pretty quickly. However, developer Riot Games has now confirmed that a solution to instalocking is in the works.

During yesterday’s developer livestream, senior competitive designer Jon ‘EvrMoar’ Walker states that “cascading agent picks” – a system whereby players take it in turns from top to bottom to pick their desired agent – will be released in a future act.

According to EvrMoar, the system will operate slightly differently in Valorant to how it does in League of Legends – Riot’s hugely popular MOBA. The developer states that players will have the option to lock in an agent when their turn rolls round, or they can wait until the end of the pick phase to select their character. This is great news for players who prefer to fill, as they won’t be expected to make their choice immediately should they be the first pick on their team.

So far, the reaction on socials has been fairly mixed. Team Liquid content creator Lucas ‘Mendo’ Håkansson says he is “glad instalocking won’t be a thing for all of eternity.” Meanwhile, others have pointed out concerns over players trolling should their preferred agent get snatched up before their turn.

One solution to this potential problem would be having players pick their preferred role prior to starting matchmaking – as is the case with LoL – though EvrMoar says that the studio has no plans to implement role selection. Regardless, a future without instalocking is undoubtedly a step in the right direction.

EvrMoar also says this was a feature the developers wanted to implement for the start of Episode 4, but isn’t ready just yet. He hopes it will arrive “some time in the episode”.

With Riot also promising to put more focus on agent balancing in the first half of 2022, Episode 4 really could be the end of players scrapping for Jett in the pre-game lobby.