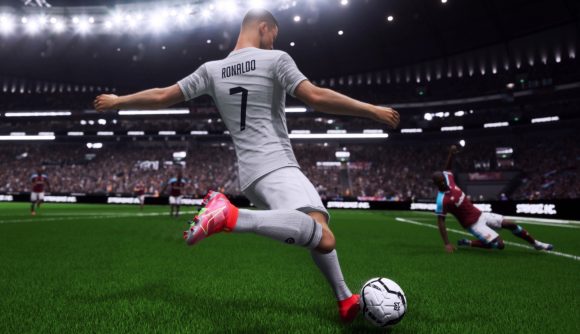 Strikerz Inc. has shown off gameplay for its competitive-focused football sim, UFL, for the first time and has also confirmed that the game is planned to launch “later this year”.

The game, which aims to win over fans of football sim juggernaut FIFA by promoting a fairer and more competitive experience, alongside being free-to-play, was announced last year, and football fans have been keen to see some gameplay. Today, we finally saw some – albeit, it was rather brief. We were however treated to lots of information around the game, including that it is in the final stage of development, that online and offline community events will be held with some of UFL’s partner clubs, and that the UFL release date will be some time in 2022.

We also learned about the various game modes that will be on offer. UFL’s Flagship Mode is the main competitive experience, and is an online league with a division-based matchmaking system. Players build teams in a similar fashion to FIFA’s Ultimate Team mode, and squads can be customised both aesthetically and tactically.

You will also have more opportunities to strengthen your squad with new players the more you play, and you can even improve the stats on your current players in-game, but details on exactly how this is done weren’t confirmed.

As well as Flagship Mode, there will 2v2, 3v3, online matches with friends, casual offline modes, custom tournaments, and special events. There will also be in-game missions and challenges to complete.

Another aspect Strikerz Inc. was keen to promote is UFL’s “seamless gameplay”. While there will be in-game seasons, there will never be any sort of resets or wipes that you occasionally see in competitive-focused games. Instead, trophies that you win that season will live on forever in your own virtual trophy cabinet.

Alongside the gameplay details and short but sweet trailer, we also learned that alongside Roberto Firmino, Oleksandr Zinchenko, Romelu Lukaku, and Kevin De Bruyne, UFL’s fifth ambassador will be none other than Cristiano Ronaldo.

As well as the high-profile ambassadors, there are also some established clubs that UFL has partnered with so far, including Scottish giants Rangers and Celtic, the Premier League’s West Ham United, Ligue 1’s AS Monaco, and even viral non-league club Hashtag United (which is also a familiar name for those keen on FIFA esports).

Today’s event will mark the real beginning of the UFL hype train, which will now steam towards its full release later this year. Only once it goes toe to toe with FIFA 23 towards the end of this year will we know if it’s managed to prize players away and really deliver on its promise of being fair, enjoyable, and competitive.