MAD Lions has gone from strength to strength throughout the 2021 LEC Spring Split Playoffs, having initially struggled to find its consistency throughout the regular split. This year’s iteration shocked many by cutting down Rogue in the first round.

Following that victory, MAD midlaner Marek ‘Humanoid’ Brázda told The Loadout that it would “stomp our team last year for sure in 20 minutes” – a bold claim when 2020’s squad toppled G2, the most dominant team Europe’s ever produced, and one which can play pretty much anything in any position on the Rift.

As fate would have it, MAD got the chance to replicate its feat in a semi-final clash that fell on the one year anniversary of that best-of-five victory. Fortunately, the lions approached the series with claws sharpened, and quickly asserted a two-game lead over its opponent – G2 had deviated from its usual style and was punished heavily for it.

The reigning LEC champions would not make the same mistake again, reverting to a more standard composition to great effect as it took game three. However, MAD snuffed out G2’s comeback hopes as it secured victory in the final game, closing out the series.

After the match, we caught up with MAD Lions’ head coach, James ‘Mac’ MacCormack, to glean his insights on the series, what it’s like preparing to face a team as versatile as G2, and how MAD continues to cultivate some of Europe’s top League of Legends talent. 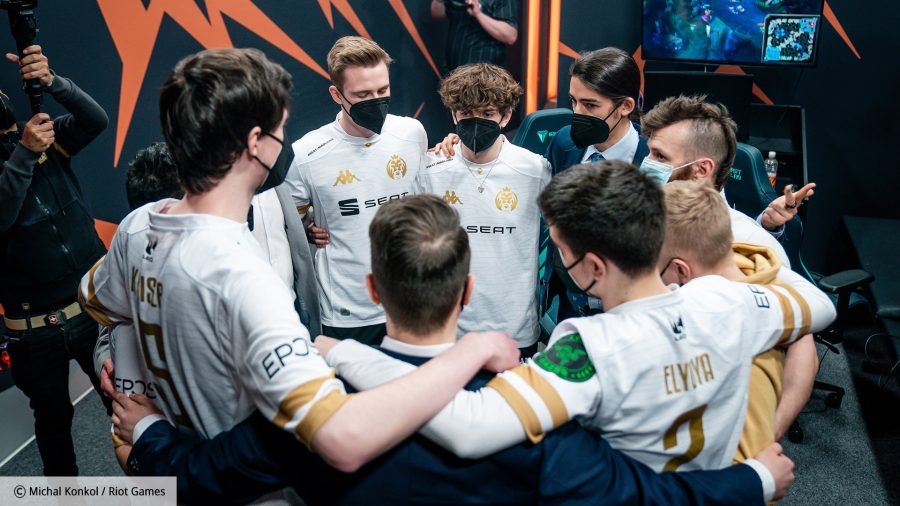 The Loadout: What are your thoughts on MAD’s performance, and how does it compare to when you beat them in a best-of-five this time last year?

James ‘Mac’ MacCormack: It was a much more convincing series against G2 than last year. Last year, there was that moment where one or two attacks could have ended [the final game in G2’s favour]. And then there was the online versus offline thing, where people were saying that we would never beat them on stage. And then there’s also the really bad run at Worlds, which kind of exacerbated a lot of that narrative around ‘MAD Lions is bad on stage’.

Today is a kind of justification in terms of ‘yes, we are a good team on stage'

I mean, it was fair to a certain extent, but today is a kind of justification in terms of ‘yes, we are a good team on stage. Yes, we have the ceiling to be able to beat G2. And yes, we are able to adapt to a really, really top level in a way that we couldn’t last year.’ Because we’re able to change our play style according to our opponents in a much more aggressive manner than we were able to last year. Last year, we were kind of a one trick pony. We beat G2 once, and then they adapted and attacked us really specifically, and we got crushed. Fnatic did the exact same thing.

I think in terms of the style that we are playing – rather than just specific champions – we have changed a lot throughout the course of the playoffs according to the situation, and according to which opponents we’re playing against. And that’s the thing that makes me the most happy actually.

G2 played some unorthodox picks today – what is it like having to prepare against a team of its caliber knowing it can pull out pretty much anything?

In the past, it’s actually been harder. I think that’s partly down to meta – because in the past the meta was really fluid and they could play so many different styles. But this split they’ve basically played one style, so it was really weird to see that they deviated from that – they played Sylas and Akali top, so Martin ‘Wunder’ Hansen wasn’t on Sion or Gragas duty. But it didn’t work out for them.

As for the outside prep work, so much of that is on the other coaching staff. Patrick ‘Pad’ Suckow-Breum, Christophe ‘Kaas’ van Oudheusden, and Carlos ‘Aagie’ Cuenca all did such an insane job – we were super, super prepared in terms of exactly what we thought the drafts were going to be. I spent all week drafting against them – and even our academy coach Jesús ‘Falco’ Pérez – like ‘ok, Kaas, tell me how you think G2 is going to attack us’, and then reacting to it. 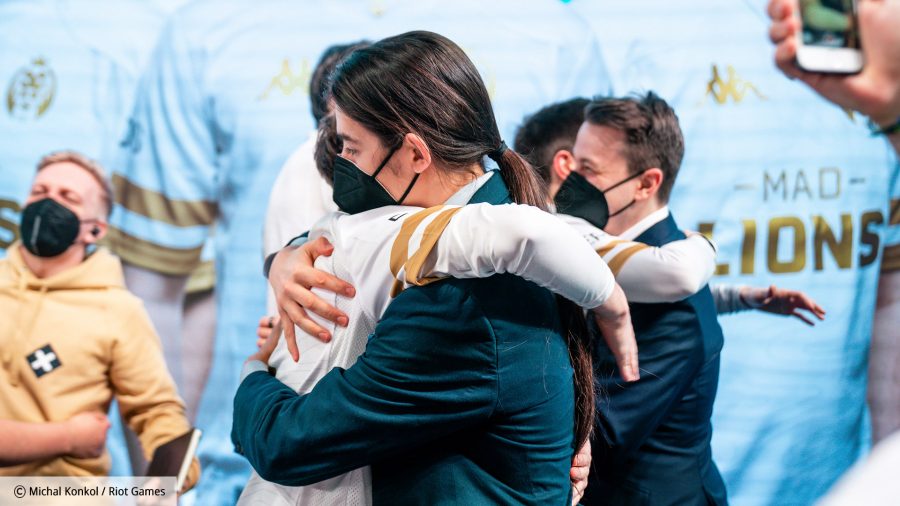 Throughout the split there have been times where MAD has struggled with consistency, but for the playoffs the team has stepped it up. What’s changed between the regular season and now?

I think part of that inconsistency is due to just us having a very methodical and long term approach to how we wanted to improve, which meant that we were building our game up very incrementally. So we were really focused on early games, but our mid to late game was actually not that good. And then we threw a couple of other games, right?

But we’ve been very good at going back and just figuring out ‘okay, who’s the best team in the world at this mid game concept?’ And then we just go and research that and then copy it. And because of that we’ve been able to one-by-one really up the ante on all of our fundamentals in mid to late game. So that’s one factor.

So from that perspective, I just want us to chase perfection, which means that we’re going to make mistakes, and that we have to be fine with that. We’re going to rush Nashors at 20 minutes, like a lot of the Chinese teams do, and mess it up and lose games. And we’ve done that. And that’s fine. Because those are the most complex parts of the game that we’re training. But through trial and error we’ve managed to get it right. And that’s thanks to the mindset. And that’s again thanks to a lot of the preparation from the rest of our staff.

Javier ‘Elyoya’ Batalla said on PGL that he was nervous after losing the early game to Jankos in game one, but his mentality throughout the series after that was solid. MAD has clearly shown its penchant for picking up rookie talent once again, so what do you look for when scouting talent? What gets them the MAD Mac seal of approval?

Honestly, a lot of it is the eyeball test. In the offseason, we had a choice between two junglers – one of them being Elyoya. And I was leaning very strongly towards him based on the way he communicated. A lot of it was also just in terms of like ‘okay, this is what we need from a player. This is the best player that will fit into the team’s culture.’ That type of thing.

So we took the person who fits those requirements, and the rest was feeling. And I think Marek ‘Humanoid’ Brázda and Matyáš ‘Carzzy’ Orság had that feeling as well. I remember sending them VODs of Elyoya and saying ‘listen to this guy’s comms and tell me what you think.’ And both of them came back to me within two hours and were like ‘this guy’s really good, you should get him.’ So it was a team effort for sure. And Elyoya is someone that Peter ‘Peter Dun’ Dun had his eye on for a long time – he’s the reason I knew about him.

I also think this [our scouting] is one of the benefits of investing in a really big coaching staff and training them up. For example, we have Pad this year who came straight from the NLC to the LEC – we’ve always recruited up through regional league coaching. Because of this, we have a really good understanding of the regional scene. And there was always someone in our coaching staff in the regional leagues last year, and had so many contacts and eyes on it. And because we have a big coaching staff, we can do that much better than a team like, for example, Schalke 04, which only has one coach. It isn’t feasible for an organisation with that structure.