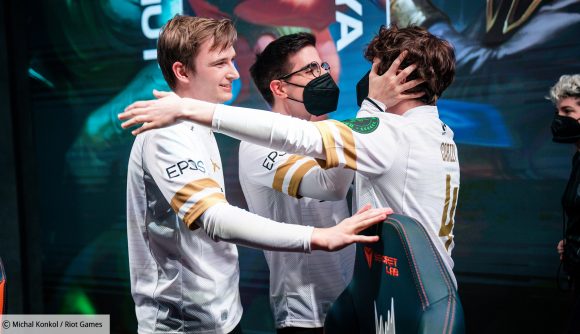 MAD Lions’ victory over Rogue in the first round of the 2021 LEC Spring Split Playoffs was a surprise to many. Having lost both regular split games to Rogue, and a crushing Summer 2020 Playoffs defeat still firmly in the memory, MAD showed up in a big way.

An early loss in the series immediately put MAD on the back foot. However, the team adapted well throughout the series, and successfully executed on its compositions to win the next three games. The series’ final game could’ve gone either way, with Rogue quickly taking the lead. But as midlaner Marek ‘Humanoid’ Brázda tells The Loadout, his opponent “didn’t really push its lead”, allowing MAD’s superior late game comp to scale and see out the series.

Now hoping for a repeat of its Spring 2020 Playoffs performance against G2 Esports, MAD’s roster is oozing with confidence. So sure of the strength of this roster, in fact, Humanoid says that “we would stomp our team last year for sure in 20 minutes this year.”

While discussing the impact of MAD’s latest additions, İrfan ‘Armut’ Tükek and Javier ‘Elyoya’ Batalla, on the team’s growth, Humanoid is full of praise – especially for his new jungler. “Elyoya’s just not nervous,” he says. “And it feels like it feels like he’s a veteran already. It doesn’t feel like I’m playing with rookie guy that is scared to make plays on stage.”

Alongside his teammates, Humanoid also appears to be in fine form. The Czech – who is usually memed for dying often, having registered one of the highest deaths per game in the league – died only six times across the whole series. Only Armut saw a grey screen fewer times with five deaths.

Humanoid attributes his performance to the increased importance of the games at hand. “The games in the regular season just don’t feel as impactful,” Humanoid says, “so I don’t really think that I’m that focused during them. I usually try to peak at Playoffs, so I think that’s why I’m dying less.”

With MAD going 1-1 in games with G2 during the regular split, the team – now firing on all cylinders – will be a difficult opponent for the reigning LEC champion. We can easily see this weekend’s series go to the full five games.