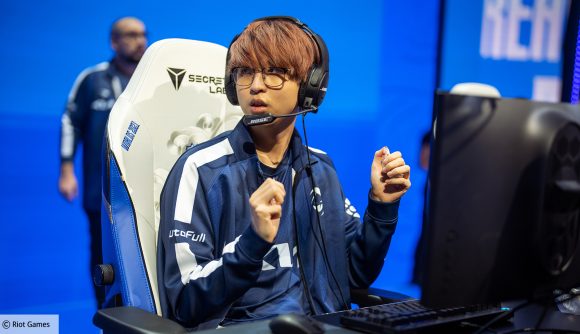 The first day of the League of Legends 2021 World Championship Group Stage has already presented some absolutely banger games, with some huge stomps to boot – take today’s first tie between DWG KIA and FunPlus Phoenix as an example. During the drafting phase, DWG KIA shocked onlookers by first-picking Yuumi – a champion which hadn’t seen the Worlds stage since 2019’s tournament – to devastating effect.

With the magical cat appearing four times in total over the course of the day, Yuumi saw more play than any other support. And with Korean third seed T1 also first-picking Yuumi, it’s fairly clear that she could very well become a priority pick throughout the Worlds main event.

With her ability to heal, bolster damage, and provide chase down potential to whoever she’s attached to – while also being completely untargetable – many have lambasted Yuumi as the poster cat for poor champion design. Such is the vitriol leveraged against Yuumi that Riot Games dedicated a whole blog post to addressing community concerns about her last year.

With Yuumi attaching herself to this year’s meta, it’s safe to say that we’ll probably see her crop up even more in soloq while grinding the LoL ranks. So, to help botlaners better understand how to get out of a Yuumi lane with less than a few claw marks, we asked someone who managed to do just that during today’s matches, Rogue’s Steven ‘Hans sama’ Liv, for his top tips for dealing with her.

supports today for some reason: pic.twitter.com/5LbZtINtyw

There are three ways to counter the fearsome feline in lane, Hans sama explains to The Loadout after toppling a Yuumi-toting Cloud9: “picking something that either matches her healing, can push her under the turret, or can kill her and her botlaner.” Of course, the most satisfying way to deal with Yuumi is the latter.

To draft an effective Yuumi-extermination lane, Hans sama points to FunPlus Phoenix’s bot lane. “We saw Kai’Sa-Nautilus earlier – it didn’t quite work out but it’s a strategy,” he says. The combo later returned during EDward Gaming’s triumph over 100 Thieves, which saw the LPL bot lane pull off the counter with greater success.

However, Rogue struck gold with its draft in the match against Cloud9, in which Hans sama and support Adrian ‘Trymbi’ Trybus made effective use of the Lucian-Nami combo that has recently shown itself to be exceptionally potent. “Today we just wanted to pick Lucian-Nami against it because we felt like it’s a good answer, even though she still had more healing than us,” Hans sama says with a laugh.

As for playing out these matchups, Hans sama has two solid pieces of advice – manage your waves properly, and don’t get hit. “Playing against Yuumi in the lane, you really have to have the wave stacked all the time and make sure that she doesn’t poke you,” he says. “She has really hard poke and she heals so much.”

We’ll undoubtedly be seeing more Yuumi tomorrow, which kicks off with a Group B clash between T1 and EDward Gaming.