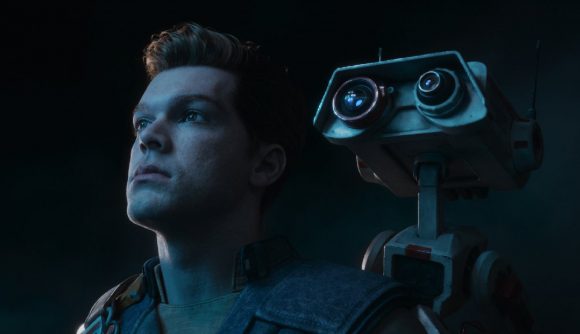 Star Wars Jedi Survivor has been officially revealed by EA and Respawn at Star Wars Celebration 2022 with a brief teaser trailer showcasing the next stage of Cal Kestus’ and BD-1’s journey together.

The game, which was unveiled during a panel at the show, and is set to release in March 2023. According to a press release, the game will release on PS5, Xbox Series X|S, and PC, confirming previous reports that it would not hit last-gen consoles.

The CGI trailer shows a number of locations from across the universe, including a battle between Cal and a Sith. The trailer ends with Cal looking at someone who appears to be suspended in a chamber still alive. Cal is trying to survive as one of the last Jedi in the galaxy. The game is set five years after the first game.

The press release for the announcement says that Respawn are “leveraging advanced technology to create more dynamic Jedi combat and cinematic storytelling to expand on Cal’s story as he matures and survives during the dark times.”

While this is only a brief trailer, we don’t know when we will hear more. Summer Games Fest is just around the corner so it could show up there or we might have to wait till later in the Summer to get our first look at gameplay.