If you were presented with a choice of splitting a couple of hundred thousand dollars with the person standing opposite you or stealing it away from them in a heartbeat, what would you do? Well, tens of thousands of you – streamers included – are having to make that difficult decision while playing a new game called, yep, you guessed it, Split or Steal.

The free-to-play game skyrocketed in the charts last week after being ported from Kongregate, leading to some of the biggest streamers in the world, such as Felix ‘xQc’ Lengyel, Saqib ‘Lirik’ Zahid, and Sebastian ‘Forsen’ Fors, to be brutally dishonest in front of their fans.

The game’s easy premise, combined with quick rounds, hilarious social interactions, and brutal outcomes makes it the perfect game for streamers to pick up. Except, Split or Steal wasn’t actually built with streaming in mind. In fact, Eoghan ‘RootPew’ Hayes made it for himself in just 10 weeks after leaving a terrible job.

“I had bad anxiety, I didn’t want to leave my house, let alone my bed,” RootPew tells me over Skype. “I needed something to take my mind off of the last couple of months, so I decided to focus on a mechanic of a game that I’d enjoy building, make it social and build it up from there. I expected maybe 100 or 200 people would enjoy playing it, but I probably should have planned a little bigger at the time!”

I had no idea he was coming on. I thought it was a DDoS!

RootPew tells The Loadout he’s been working on Split or Steal on and off for the last ten months. When he originally published it on Kongregate last year, the game was picked up by around 30,000 people, but those numbers dropped off quickly. The Irishman ported it over to Kartridge shortly after, where it had a brief spell of popularity, but he was left with a small core playerbase who wanted more.  They begged him to port the game one last time to Steam, and while the developer agreed, he was already planning for the game’s sad end.

“The community requested a Steam port, so I said after that, the last patch I’ll ever make for this is to put bots in the game so there will always be someone to play against,” RootPew says with a laugh. “It seems almost insane to look back and think I said that because in the last hour alone, over 12,000 games have been played – all by real people.” 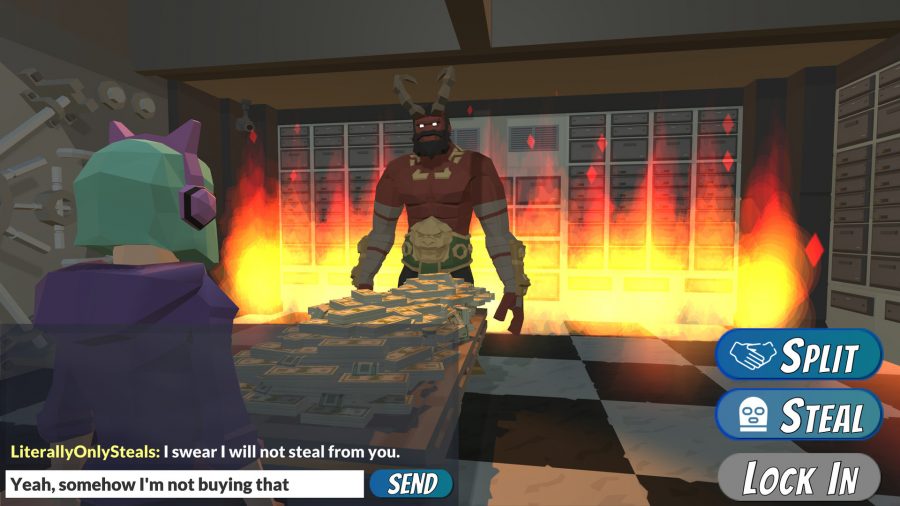 Split or Steal isn’t the biggest free Steam game by any margin, but it’s had a pretty impressive uptake in the two weeks since its launch, thanks so some fairly big household names picking it up on platforms like Twitch and Mixer. But Hayes admits he wasn’t ready to feel the full force of the streamer effect.

“The first time it was streamed by a big name was xQc and that one ripped the servers down,” recalls the developer. “I had no idea he was coming on to play. I was getting an alert from the server and I thought for some unknown reason someone was attacking it – I thought it was a DDoS!

“I was made aware someone famous was playing it, so I looked into it and adjusted some things, and when I thought I had it all hardened up and ready to go, he went to play it again and it took three times more traffic than normal and went into a full table lock. No one could play a game.”

Of course, RootPew’s game isn’t built with streaming in mind. Forsen and xQc actually moved their webcam displays over the split or steal options to prevent stream snipers taking advantage. Although Lirik didn’t seem to care who saw his choices as he flirted with the game in between Escape From Tarkov rounds, the developer knows the future of his game depends on moments like these, and wants to accommodate streamers in the best way possible. That means, somewhere along the line, a Split or Steal build that allows streamers to hide their options, their karma, and organisation details will appear.

But despite all of that, there are some key features that allow communities to flourish. If you play a handful of games, you’ll come across factions, groups and religions who all believe in either splitting or stealing. You’ll quickly become accustomed to the shouts of ‘Banana Splits,’ ‘we Orc, we split,’ and ‘split gang’ in chat, but like the old British game show Goldenballs, which RootPew says he only watched mid-way through development, there’s something magical about the way players interact with one another.

“The most overwhelming thing to me right now is how much people are getting into it,” he explains. “I wouldn’t call myself the head of it all. This is something they’ve built for themselves – I just built the platform. I didn’t expect this overwhelming response to come out of it but every now and then I do log on in a private user account that doesn’t have my name on it and sit back and watch all of this stuff unfold, and to be honest, it’s incredible to see. It’s really, really fun to watch.

“And if it’s something that streamers can play in between other games, then that’s a million times more success than I ever thought I’d get from the title.”

Read More
Split or Steal on Twitch
Who is Summit1g?
Biggest esports games