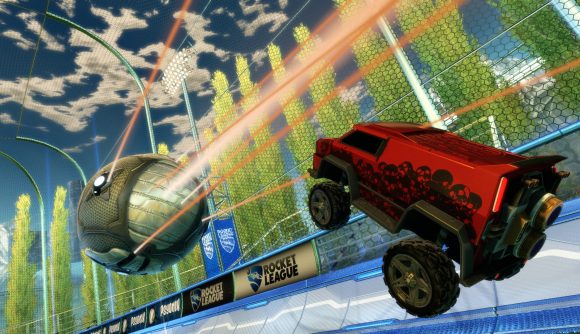 Rocket League’s developer’s Psyonix is preparing for arguably its biggest update in the game’s five year history. With Rocket League on the verge of going free-to-play next week, a whole host of features have been added to the game in the latest patch.

One of the headline features included in that patch, which is now live, is that cross-platform progression is now available. Petrol heads can now link each platform they own Rocket League on to a single Epic Games account to share progression, inventory, competitive rank, and more. You’ll have to select a primary platform for progress, so ideally you want to pick the one you have a higher rank on.

Old players will also be granted legacy status with this patch, so you’ll find loads of new goodies in your inventory when you next log on. As part of being an original Rocket League player, you’ll be given Faded Cosmos boost, Golden Cosmos boost, Dieci-Oro wheels, a Huntress player banner, and an Est. 20XX title.

The highly-anticipated changes to tournaments have also gone live with this update, although only a few test events will be available to play until the game goes free-to-play on September 23.

As well as the new features above, a few changes and bug fixes have been made. Here’s the full list: