Rocket League is changing how challenges work ahead the game going free-to-play. Though the only confirmed date we have for free-to-play beginning is ‘2020’ right now, it has been heavily speculated that it will line up with the start of Season 15, which will kick off some time in the first two weeks of September.

Challenges are linked to Rocket Pass at the moment, but with the internal structure of the game reshaping to accommodate the pivot to free-to-play, they’re about to be game wide.

Challenges will come in three categories: Weekly, Season, and Event Challenges. Each player gets three Weekly Challenges, while Premium players (those who bought the game before free-to-play) will get an additional three. Season Challenges span a season, obviously, and will take much longer to complete but offer higher level rewards. Rocket League is yet to confirm how Event Challenges will work, how often they will appear, or what sort of rewards they might bring.

As well as the expected rewards of customization items and XP, these Challenges introduce a new feature to Rocket League: Drops.

Presumably named after Counter-Strike: Global Offensive drops, these are boxes which contain different inventory items, and come in every rarity tier. Drops can contain items above their own rarity tier, or equal to it, but not below it. Basically, you’re guaranteed to get at least what it says on the tin, but you might get lucky and win big. The items received from Drops are tradable to other players, but the Drops themselves are not.

In free-to-play, Challenges and Drops will be the main way players earn free items, rather than by leveling up. 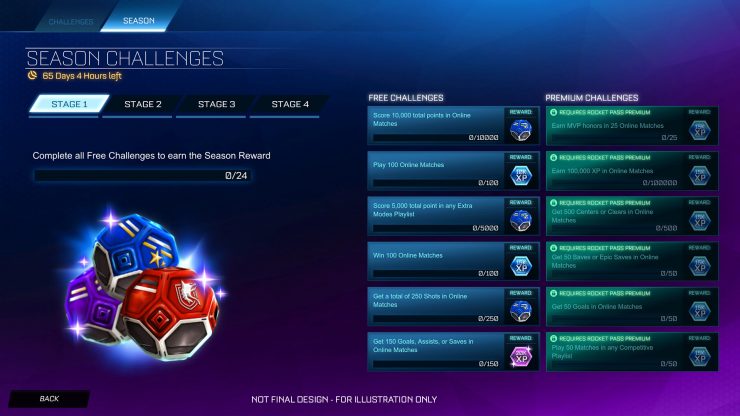 Rocket League hopes Drops will add greater variety to the current item pool. When unlocked, they can contain items from Blueprint (or previous Crate) Series, including everything from Champions 1 Series all the way to Vindicator Series.

New players will not receive Challenges immediately. In order to unlock them, newcomers must either complete a set of Driver Challenges or reach level 20.