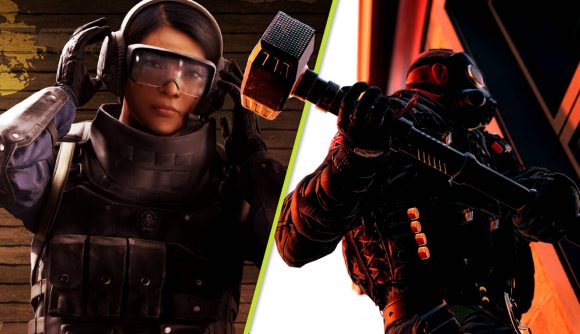 The introduction of Azami and Operation Demon Veil is just the start of a stacked year of Rainbow Six Siege content and updates from Ubisoft. Following the exciting reveal of what’s to come through the Rainbow Six Siege Year 7 roadmap, The Loadout spoke to Ubisoft about what fans can expect from the new ranked system expected to launch in Y7S3.

Referred to as Ranked 2.0, Rainbow Six Siege’s new ranked system is going to do away with placement matches and will separate your rank and skill. This will create a more rewarding experience that should offer a better sense of progression for players looking to climb the Rainbow Six Siege ranks.

However, one major change is coming that is sure to ruffle a few feathers. When asked if players would be able to see their skill rating in-game, something currently available in Siege’s ranked system, associate game director Aurélien Chiron revealed that it’s “going to be invisible.”

“The MMR numbers will be invisible. Although we originally planned for them to be visible, we’ve been exploring many options to land on the best Ranked 2.0. We believe our new progression system will protect and reward our players’ skill and will have more to share at a later date.”

Keeping a player’s skill rating invisible feels like a largely cosmetic change, but why is Ubisoft making more meaningful changes and revamping Rainbow Six Siege’s ranked systems beyond that? Chiron explains that “the current rank system is not a progression system but it’s perceived like one.”

The current ranked system “is a skill system”, according to Chiron. “It tries to find the skill of every player playing Siege as fast as possible… Your rank equals your skill.” This is allegedly creating a bad experience for “players that don’t play a lot or [players that] are below average in terms of skill” and led to the reimagining of this more competitive mode.

Year 7 improvements focused on your experience:

👑 Reputation System rollout to reduce toxicity.
🥇 New Ranked 2.0 with a better feel for the climb. pic.twitter.com/QWEl2Jj0zP

The biggest difference is going to be the fact that “in the new system, rank and skill will be two different values.” Chiron explains that “skill will ensure fair matches [take place] and your rank will start from Copper and try to catch up to your skill.” This means that “without the skill of a Diamond, a player is unlikely to reach Diamond rank.”

However, there are going to be more opportunities for players to earn rewards throughout the new ranked system. Chiron has revealed that there’s going to be “a reward in every division in every rank” – and that they’ll stack up. This means that players that reach Platinum 3, for example, will get rewards for Platinum 3, Platinum 4, and Platinum 5, all the way down to Copper 5.

This all sounds like a promising improvement on Siege’s current ranked system, but it’s hard to say how effective it will be without more information. Keep an eye on official sources for more information in the coming months.