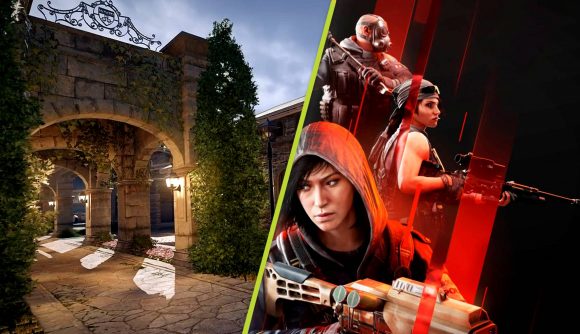 Year 7 is going to be a huge year for Rainbow Six Siege. Ubisoft has revealed Operation Demon Veil, the first season arriving in 2022, but it has also given us a look at what players can expect for the next 12 months.

The Rainbow Six Siege Year 7 roadmap is packed with information on what Ubisoft is planning to introduce to their tactical shooter over the next four seasons. As expected, four new operators are scheduled to be added – one per season, starting with Azami in Demon Veil. However, there’s so much more to look forward to.

In Operation Demon Veil, Season 1, Ubisoft is introducing the attacker repicks feature to casual and ranked playlists alongside Team Deathmatch, which will be available as a permanent playlist going forwards. In addition to this, Siege’s first new map in three years is set to debut in a mid-season update. As an Irish castle turned country club, expect this map to be lavishly decorated inside. Siege’s Match Replay system is also being made available for console players starting from Season 1.

Rainbow Six Siege Year 7 Season 2 will see a new Team Deathmatch map added alongside some onboarding features to help attract new players. A series of detailed operator tips will be added to the in-game menu and a playable shooting range will offer players a place to get to grips with new operators and weapon builds. Ubisoft is also working to refine Siege’s reputation system and the first stage of this process will be introduced in Season 2. The new operator for Season 2 will reportedly be from Belgium.

In Season 3, another new competitive map will be introduced – however, we don’t know any details on this map other than the fact that it’s based in Singapore. This season’s new operator will also be Singaporean. In addition to this, Ubisoft is introducing stage two of its reputation rework and a complete overhaul of Rainbow Six Siege ranked play, which is being dubbed “Ranked 2.0”. There isn’t a lot of information about the new ranked system yet, but The Loadout has reached out to Ubisoft for extra details and we’ll keep you updated if more is revealed.

Season 4 will see another new operator, hailing from Colombia, added to Rainbow Six Siege. At the moment, Ubisoft hasn’t confirmed whether a new map – of any kind – will be added to the game for Season 4. The third and final stage of Ubisoft’s reputation rework will also be implemented in the Season 4 update and a permanent Arcade Playlist will be added to the game. 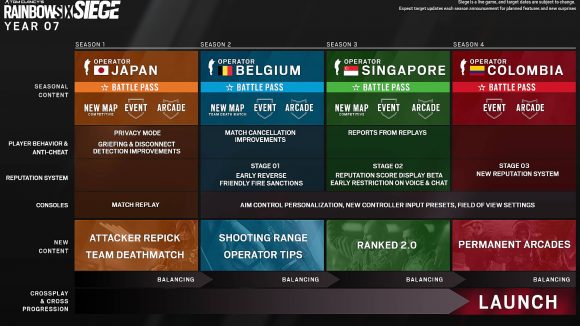 For those of you waiting for cross-play and cross-progression, there’s good news and bad news. The bad news is that these features aren’t going to be added to Siege for some time. The good news is that Ubisoft is aiming to implement them in the Season 4 update at the end of the year. It’s a long time to wait, but Year 7 could be the start of a resurgence for Rainbow Six Siege – there’s a lot more content than we were expecting, anyway.