Lion has stood out during our time with Rainbow Six Extraction thanks to his gadget being invaluable in an Incursion, providing you and your team with valuable intel.

Focused on reconnaissance, and providing your team with information about the Archaean threat on the map, Lion is suited to a support type role. However, his weapons are also quite powerful, meaning he can hold his own in a fight. But, with four weapons, and the amount of REACT gear on offer in Extraction, it can be hard to nail down what is the best loadout for Lion when it comes to endgame incursions such as the Maelstrom Protocol.

But, which weapons and REACT Tech should you be equipping onto Lion when taking him into an Incursion? Read on for our choice for Rainbow Six Extraction’s best Lion loadout, focused around spotting enemies and tactical plans and infiltration.

Here is our choice for the best Lion loadout in Rainbow Six Extraction: 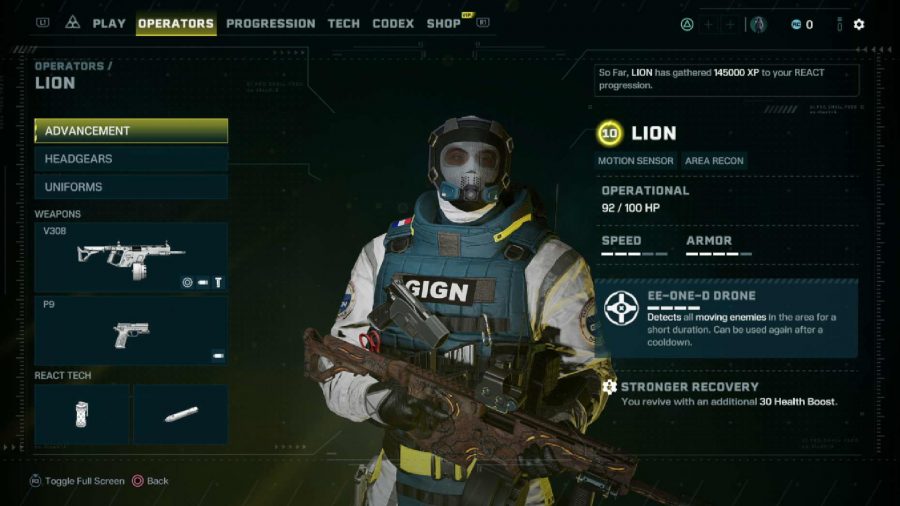 As mentioned above, the best way to utilise Lion is when attempting to complete objectives stealthily and being aware of your enemies at all times.

Because of that, you will want your primary weapon to be strong when silenced. The V308 benefits from a pretty stable recoil pattern and a fantastic large magazine. But, you may end up in a pinch, which is where the LFP586 secondary weapon comes in, offering power in a small revolver.

With Lion being built around stealth, the Glue Grenade is a great equipment choice, slowing down enemies and allowing you to take them down from behind in silence. Pair that with a Revive Kit for those tough situations you find yourself in and Lion and his EE-One-D Drone is unstoppable in high-level endgame play.