As an operator built around deception and distraction, Alibi is the perfect choice for anyone looking to keep Archaeans off their back in Rainbow Six Extraction. In fact, she is one of the top operators in our Rainbow Six Extraction tier list. Her PRISMA decoys are an asset to any squad, but this isn’t the only choice you need to make before dropping into a Hot-Zone. You need to make sure that you have the best Alibi loadout at your disposal to make the most of her unique ability and natural strengths.

As you progress through Alibi’s unique unlocks, you will get access to new primary and secondary weapons alongside several important upgrades that can make all the difference when you’re in the thick of it. However, there’s also a wide selection of React Tech grenades and gadgets to choose from – some of which compliment Alibi’s fantastic unique ability.

After spending some time experimenting with Alibi, we have put together the best Alibi loadout to give you a strong fighting chance in Rainbow Six Extraction.

This is the best Alibi loadout in Rainbow Six Extraction based on our time with her. 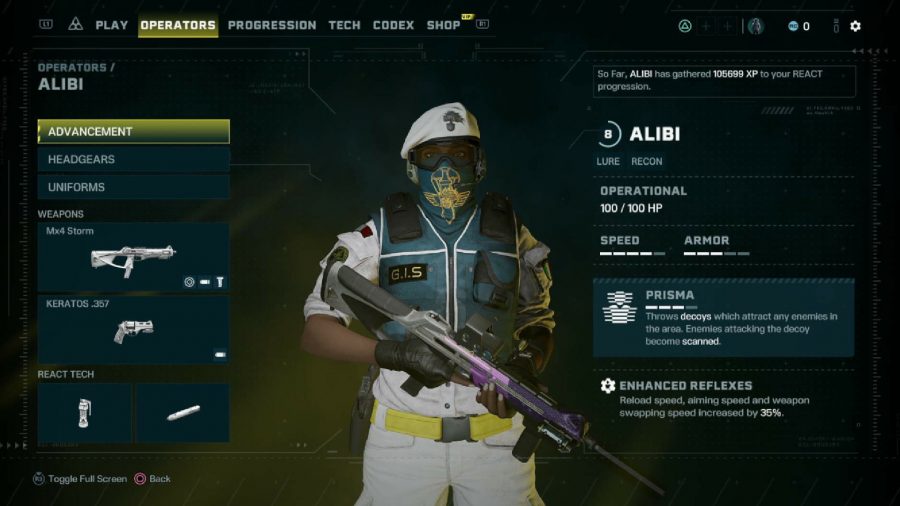 Initially, Alibi comes equipped with the Mx4 Storm SMG as her primary loadout weapon. It’s far from a bad choice for those of you starting out, but the Alda 5.56 LMG is what you want to be gunning for. This level nine unlock is an invaluable improvement on Alibi’s lighter SMG.

Speed is important in Rainbow Six Extraction, but the Alda 5.56’s superior firepower can’t be ignored. At this stage of progression, Alibi will also unlock Speed IV – which increases her movement speed by 30%. Couple this with an Angled Grip and you shouldn’t have any issues with the heavier LMG.

With stealth also a vital part of success in Rainbow Six Extraction, swapping out Alibi’s first secondary, the Bailiff 410, with her level six unlock, the Keratos .357, is a no-brainer. They are both revolver handguns, so they’re far from the best secondary options available in-game, but the Keratos .357 does offer suppressor support.

When it comes to React Tech, there’s really only one way to go: ARC Mines. These mines can be used with Alibi’s PRISMA decoys for devastating attacks on any Archaeans unfortunate enough to be caught in the chained attacks these forward-facing mines offer. ARC Mines are unlocked at React Tech development milestone four, though, which isn’t instantaneous. That is why we recommend using Claymores or Stun Grenades in their place when you’re just starting out; Claymores work well with Alibi’s PRISMA decoys and Stun Grenades can be a useful tool in disrupting attacking Archaeans.

Deploying into a Hot-Zone with Body Armour is also a sensible option for any operator – this will add a percentage of damage reduction and means that Alibi will be knocked into a down but-not-out (DBNO) state rather than death. Once used it can be resupplied with a supply crate found on the map. This makes it an invaluable resource for staying in the fight when things get tough.

If Alibi isn’t screaming at you as someone you want to explore further, we have a definitive Rainbow Six Extraction walkthrough detailing the best alternatives for you in your fight against the Archaeans. It’s also worth checking out our guide on Rainbow Six Extraction’s Proteans – these are the toughest enemies you’ll face, so being well prepared is vital.