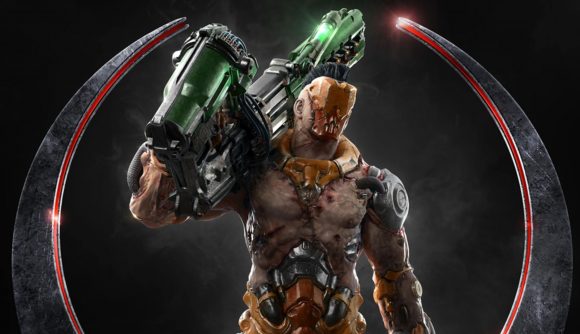 Quake is reportedly being remastered, with an announcement of the game expected at QuakeCon this weekend. But, ahead of the show, the ESRB has seemingly outed the remaster and revealed that not only is it coming to PC, but that the franchise will make its console debut, releasing on PS5, Xbox Series X|S, PS4, Xbox One, and even Nintendo Switch.

The rating, which can be found on the ESRB’s website (thanks ResetEra) doesn’t offer much in the way of details on what this remaster could be and just gives us a general description of Quake.

Some were hoping for a brand new Quake game, but a leaked description from QuakeCon and this rating points towards a remaster. What is interesting is that this game is releasing for all platforms, despite Bethesda now being owned by Microsoft, meaning this is yet another Bethesda game being published on PlayStation by Microsoft, after Deathloop and Ghostwire: Tokyo.

QuakeCon begins today, so you won’t have to wait long to hear about this remaster and what upgrades PS5 and Xbox Series X|S players can expect.

The game is reportedly a joint project between idSoftware and Wolfenstein developers MachineGames, who have likely been working on the game since 2019 and are currently working on an Indiana Jones game.

Regarded as one of the best first-person shooters of all time, hopefully the game will make our best PS5 games and best Xbox Series X games list.