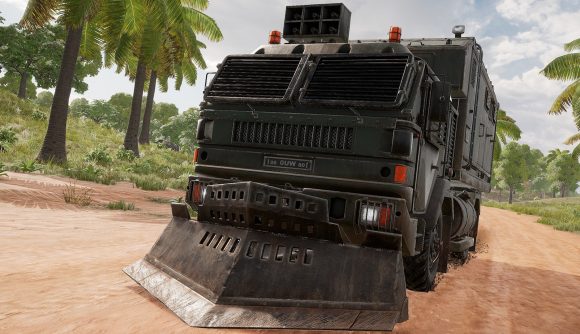 Hear that rumbling? That’s the sound of PlayerUnknown’s Battlegrounds’ new loot truck. The armoured vehicle, which is packed full of contraband and customised weapons, will be trundling through remastered Sanhok when it gets the green light for release next week.

The truck will drop alongside Season 8, which brings the new and improved jungle map back to the forefront of the game’s competitive scene. While lots of changes have been made to the map, the eyes of loot-hungry players will be drawn to the autonomous cargo transports that drive around the jungle. These offer new ways for players to gear up, but they’re not easy to take down.

Players will need to be persistent to destroy the truck, but once inside they’ll be rewarded with big caches of weapons, including weapons that come pre-installed with attachments and cool skins.

But you’ve got to be careful. A lot of the towns on the loot truck route have pre-made firing stations which are perfect for ambushes. So if you don’t have the fire power to take one of these beasts down, it’s probably best you avoid it altogether.

If you want it you’re gonna bleed but it’s the price to pay. pic.twitter.com/CippsasUf2

The new season also comes with new survivor pass, Payback and a new season of PUBG ranked. So if you’re ready to run through the undergrowth and relive the good old Sanhok days, gear up for the update, which lands on PC on July 22 and console on July 30.