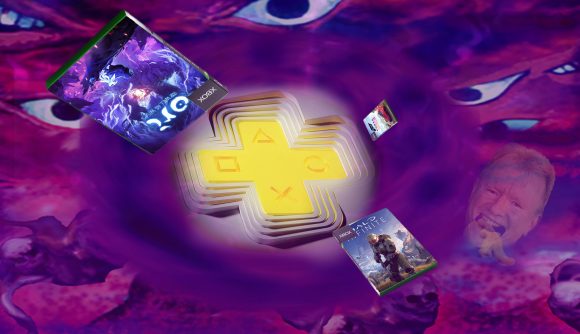 This week Sony announced plans to overhaul its PlayStation Plus service, providing players a new, three-tiered subscription system with increasing levels of access to old gen games spanning across the generations. According to a source close to Sony HQ, the company is set to announce a secret fourth tier to the new structure which will allow players to delete one Xbox exclusive per year.

The new technology behind the PS Plus Extra Ultra 4K 3D Surround Sound Bravia package, which Sony has codenamed ‘Turkey Dinosaurs’ after CEO Jim Ryan’s favourite food, is reportedly able to create tiny pockets in space-time, allowing players to pop even the peskiest of competitor titles into a miniature void, eradicating it from our collective memory. In fact, there’s a very good chance that internal testing of the tech is responsible for the lacklustre lineup of Xbox exclusives at the launch of its current gen consoles, the Series X|S.

So how much will the PS Plus Extra Ultra 4K 3D Surround Sound Bravia package set gamers back? Our resident expert Stevie Racer says “$299”. When asked for further elaboration on if this was a monthly or yearly subscription fee, Racer simply kept repeating the price.

While this sounds like quite the bargain for hardcore fans, there is one major caveat to the secret tier. Unfortunately, players won’t be able to completely delete classic Xbox titles like Halo 2, Gears of War 2, and the critically-maimed Double Dragon 2: Wander of the Dragons. This, apparently, is due to Sony not currently having the capacity to reverse-engineer the technology for old gen games.

But why is Sony choosing now to strike at Xbox? Following Microsoft’s $69 billion acquisition of Activision Blizzard back in January, there were fears that iconic PlayStation series like Crash Bandicoot and Spyro would be ripped away from the platform’s players. With this latest move, it appears that Sony is responding to the perceived threat with force at an atomic level, despite reassurances from Xbox that this wouldn’t be the case.

As a special bonus, players will also receive a unique in-game NFT for Spider-man – no not the Marvel one, the 2000 PlayStation version. It is currently unknown how the NFT will materialise, nor how players will be able to redeem it on the antiquated console. For further insight, The Loadout approached a self-professed ‘expert’ on NFTs, Firstname Bunchanumbers, who simply says “trust Sony bro, it’s the future”.

While question marks loom over the competitive integrity of Sony’s latest offering, Xbox has just announced that it has bought up three more major studios, as a treat.