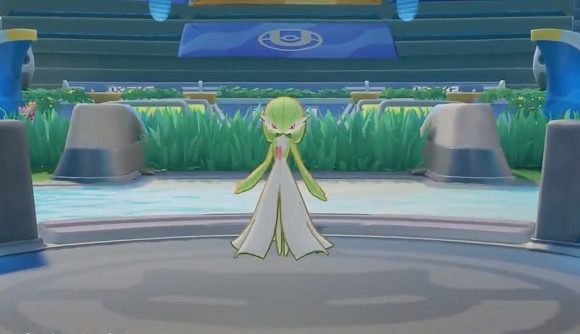 Pokémon Unite is adding a new character to its lineup just a week after launch. Gardevoir will be making its debut in Pokémon Unite tomorrow, becoming the 21st Pokémon in the game.

Gardevoir will join the game’s already stacked roster of Attackers, bringing the total number of options in this class to seven – the most of any class. Gardevoir is described as a “ranged Attacker”, and can “warp time and space with its psychic powers”, according to the new Pokémon’s announcement video.

While we don’t know the names or effects of Gardevoir’s moves, we do get a brief glimpse at what to expect. Standard ranged damage moves, some moves that create a damage-dealing area, and what appears to be a Unite move that deals enormous damage in a radius around Gardevoir. This is all yet to be confirmed. Gardevoir looks to have the potential to rank highly on our list of the best Pokemon Unite Attackers – but could it topple our top picks of Pikachu and Greninja?

Attention, Trainers! Gardevoir is arriving to the shores of Aeos Island on July 28!

Keep your eyes open for when this Ranged Attacker steps into battle this Wednesday! #PokemonUNITE pic.twitter.com/3eurxLvZH5

Gardevoir was previously revealed as an additional character last month, along with Blastoise and one mystery Pokémon that could well be Zeraora, which is granted as a free bonus when you log into Pokémon Unite before the end of August.