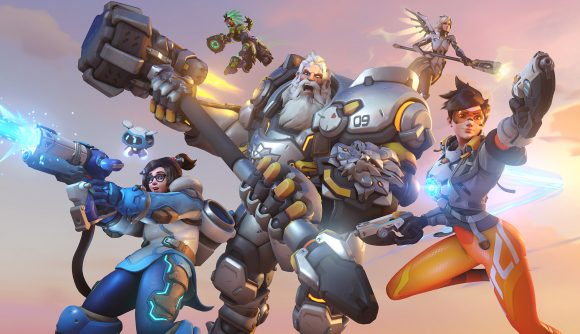 Overwatch fans have been given the most in-depth look at Overwatch 2 gameplay yet, and while beautiful maps, healer UI updates, and ability reworks for the likes of Winston and Mei all got tongues wagging, there was one headline announcement that has split opinion: Overwatch 2 will be 5v5.

With Overwatch fans and players only ever having known 6v6 and a 2-2-2 team composition, this is arguably the biggest shakeup in the game’s history so far. Overwatch 2 will revert to a set 2-2-1 composition, with two supports, two DPS, and one tank. During a livestreamed showcase yesterday, members of the development team explained that there were a number of factors that led to this decision, while fans also drew some alternative conclusions as to why five-man teams are the future.

From a gameplay perspective, Overwatch devs admitted that having two tank players who could soak up damage often led to less exciting gameplay and that having 12 players on the map also became quite chaotic. With one less tank on the team and less players on the field in total, gameplay should become more varied and a change in map design will provide more hard cover for players, rather than sitting behind your tanks all the time.

There was also a widespread consensus that having less players on the field will improve watchability for newcomers to Overwatch esports.

However, some fans thought the change to 5v5 had slightly more cynical or business-orientated motives.

Some speculated that the decision to make teams smaller stems from the fact that players climbing the Overwatch ranks can experience incredibly long queue times. Others also believe that it was done to slash operating costs for teams in the Overwatch League and follows on from Activision Blizzard’s other franchised esports competition, the Call of Duty League, shifting from 5v5 to 4v4 for this season.

Whatever the motives, the decision to have one less player on a team has divided opinion.

Two-time OWL champion and San Francisco Shock tank Matthew ‘super’ DeLisi says that he is unsure whether the move will be the ebay thing for Overwatch, but does admit that “coordinating” and “synergising” with a second tank player is one of the most rewarding and fun parts of competitive play.

As for whether or not 5v5 is good for the game, I won’t pretend to know the answer. But coordinating with a tank, building synergy and dominating is probably one of the most fun things I’ve done in a game

Atlanta Reign tank Blake ‘Gator’ Scott was disappointed with the news, saying it will be hard to stay motivated for the remainder of the season knowing that a role he “spent five years to perfect” will be “deleted”.

Imagine spending 5 years to perfect your role…..Just for it to be deleted while knowing your role does not translate to another your expected to give all you got till the end of season (:

However, while most tank players in the OWL were concerned by the news, those looking at the bigger picture seemed more positive about the 5v5 change for Overwatch 2.

Esports host and caster Alex ‘Goldenboy’ Mendez was quick to point out to tank players that there will still be a need for those who specialise in certain tank heroes when playing against certain teams or on certain maps.

Hot take time: People complaining about 5v5 Overwatch at a pro level who think off tank players will lose their job forget that just because you have one tank doesn’t mean you’ll have one tank player on the roster. One person cannot be great w/ every tank hero.

Meanwhile, Boston Uprising’s president says that while he feels for tank players and OWL managers, he is “bullish” that 5v5 will improve the viewing and playing experience in the Overwatch League.

OW/OWL has dealt with a lot of clutter/barrier issues for a long time both from a player POV as well as viewing experience. I am bullish on 5v5 being better than 6v6 overall for both playing and viewing.

That being said, as a tank player and OWL manager, I feel for my people.

This huge shakeup to competitive Overwatch could end up being a massive boost for OWL viewership and improve the player experience in ranked, but there will sadly be at least a few tank players – both established and aspiring – that will be concerned.