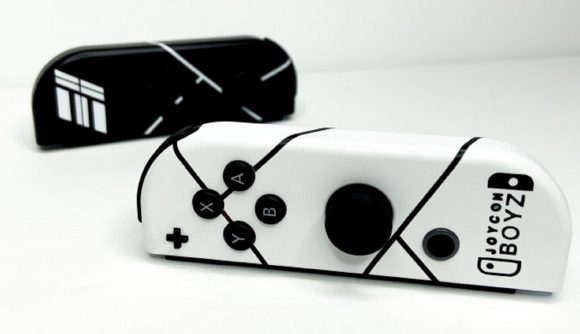 Nintendo has once again come under fire for its aggressive attitude towards cease and desist orders, coming in the weeks after it shut down a Super Smash Bros. tournament run by The Big House.

This time around, Nintendo sent a cease and desist notice to Alex ‘CptnAlex’ Blake regarding his custom Joy-Cons, which were customised in memory of popular streamer Desmond ‘Etika’ Amofah, who died last year. The Joy-Cons, nicknamed Etikons, were crowdfunded last year with all proceeds going to the JED Foundation, a charity that helps protect young peoples’ emotional health and prevent suicide.

The custom Joy-Cons were successfully crowdfunded on Indiegogo in 2019, and the remaining stock was for sale on CptnAlex’s Etsy site, alongside many other custom controllers. However, in September 2020, Nintendo ordered him to take down some designs that infringed on their copyrighted properties.

While CptnAlex is licensed to resell products and modifying Joy-Cons is perfectly legal, it appears that the problem involves the use of the copyrighted word Joy-Con and the official Switch Joy-Con logo for the JoyCon Boyz insignia on the right controller.

First campaign was not successful.

Remaining stock of Joycons were for sale my Etsy since last year.

Nintendo sent me a cease and desist at the end of September.

Here’s a picture of me with a bin of all the shells I can’t sell anymore pic.twitter.com/ytdWzObh9x

Despite this all happening three months ago, the controversy has recently resurfaced as fans raise concerns about the morality of the company’s endeavours against community-run projects.

CptnAlex says that he is redesigning some of the controllers he had to take down, but that the Etikons would require a completely new manufacturing run, which would be considerably more expensive than the other designs.

Etika fans can rest easy, though, knowing that the original run of Joy-Cons raised over $10,000 for the JED Foundation.