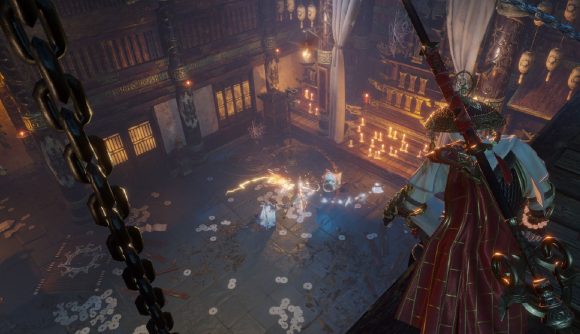 Naraka Bladepoint, a popular PC battle royale developed by 24 Entertainment, has had console ports in the works for some time. During the 2022 Xbox and Bethesda Game Showcase, we finally learned that Naraka Bladepoint will be coming to Xbox Series X|S later this month – and it’ll be hitting Game Pass too.

You haven’t got long to wait for Naraka to hit Xbox’s current-gen consoles either. The battle royale will officially land on Xbox and on Game Pass on June 23, and even before that proper Naraka Bladepoint console release date there will be betas running this month as well. Not only is the console version hitting Xbox Game Pass, but the PC version (which continues to pull in decent average player counts on Steam of around 50,000 – 60,000 despite it being ten months since its full release) will also be coming to PC Game Pass too. It’ll also have crossplay between PC and console.

While Naraka Bladepoint opted not to go for the free-to-play model like many of its battle royale competitors, such as Apex Legends or PUBG, putting the game on Game Pass and bringing it to console will certainly open up some new opportunities for its player base to grow.

The decision to bring Naraka’s console versions to Xbox suggests there has been a key shift in priorities from 24 Entertainment over the last 12 months or so when it comes to which console platform to launch on first.

Last year, a console trailer was put out into the wild, but was titled as a PS5 trailer. 24 Entertainment also told The Loadout in an interview last July that the studio was “working with Sony already” about making a console port. “We’re also talking with Xbox but right now we don’t have a big enough dev team to do all the porting altogether,” a studio representative added at the time.

A PS5 version of Naraka Bladepoint is still in development, and will launch later in 2022.

A new campaign mode is also coming to Naraka Bladepoint on the 23rd.

Naraka Bladepoint was already one of the best battle royale games out there, but its popularity will likely spike when it hits both Xbox Series XS first and PS5 later down the line