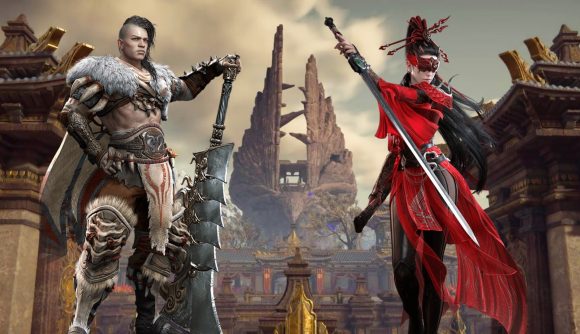 Naraka Bladepoint’s upcoming new map Holoroth has been properly revealed, and it looks like a blend of classic Naraka aesthetics with some new approaches to map design for the battle royale game. Yes, players can expect a similar sort of vibe to Naraka’s original map, Morus Isle, with temples littering the map and plenty of open spaces for melee and ranged skirmishes between teams, but 24 Entertainment has certainly added in a few things that will make Holoroth stand out from its predecessor.

First, Holoroth will have weather conditions that impact gameplay. There are two different weather conditions for its two distinct biomes – bitter snow storms in the snowy area of the map, and sandstorms in the desert area. These can slow and stun players caught out by them – which might make running from the closing storm or an enemy team that much harder.

Holoroth also looks to cater more towards Naraka’s movement mechanics, like grappling hooks and unlimited free climbing, by expanding upwards. The footprint of the map is similar in size to Morus Isle, but the verticality has been increased in Holoroth.

During a preview event, 24 Entertainment says that if you jump from the highest point of the map, it will take you a full ten seconds for you to hit the ground.

Holoroth looks to be an interactive map too, with various traps and mechanics giving you some new ways to damage opponents or find some sweet loot.

There is also a new mechanic in the Plumed Castle POI that can award you with a chest full of gold loot. We won’t give the game away entirely as to how you can do this, as it sounds like it’s one of many in-game secrets and mechanics that 24 Entertainment wants players to gradually uncover.

The Naraka Bladepoint’s first new map since launch will be added to the game in the coming weeks, but will initially have one of the main POIs fenced off from players as 24 Entertainment is still working on this area. The map will expand shortly after launch to include this POI.

It was also confirmed during the preview event that for the time being, Naraka Bladepoint esports would continue to operate with just Morus Isle, but that it would consider adding Holoroth to pro play in the future.

For a look at which characters you should be using to pummell the opposition in Holoroth, check out our Naraka Bladepoint tier list.