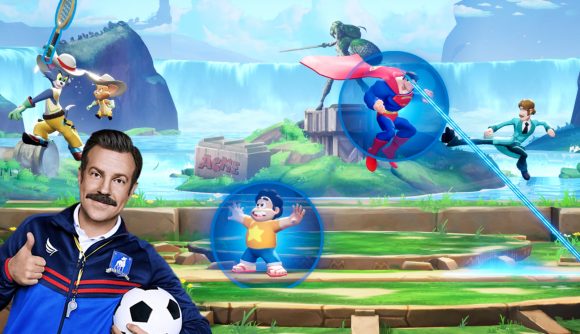 MultiVersus recently revealed that a MultiVersus open beta is coming in July, giving fans the opportunity to battle it out with many iconic TV and videogame characters. So far only 15 characters have been officially revealed for this free-to-play fighting game. However, impatient fans have already started datamining the game to see what they can dig up about future character announcements and one character name really stands out amongst the crowd.

A Redditor by the name of ‘hugeleakeractually’ recently unveiled a list of characters set to join the roster of MultiVersus. The list includes legendary characters such as Scooby-Doo, The Joker, Rick and Morty, and Marvin the Martian. However, some names stand out a bit more than others, such as Gizmo from the Gremlins, LeBron James, and, most notably, bumbling football coach Ted Lasso from the hit TV series.

While other characters make sense in the grand scheme of things, Ted Lasso is a really surprising name that has cropped up. Ted Lasso is the star of the Apple TV+ series of the same name and it is a real shocker that this dorky soccer coach from a live-action series is possibly going to be joining the MultiVersus roster as a fighting game character.

On paper, his character sounds whacky enough to actually work in MultiVersus, his moveset would be hilarious to see, as Warner Bros could have an absolute field day with designing the abilities of his character. Recently someone modded Minecraft Steve into the MultiVersus alpha, hopefully, no one will have to mod Ted Lasso into the game.

This is the “confirmed” list of characters from hugeleakeractually:

This is a fairly substantial roster leak, and some or all of these rumoured characters may never grace the fighting game. However, it does show you just how deep Warner Bros’ stash of IPs really is, and how the possibilities for the MultiVersus roster are pretty endless.