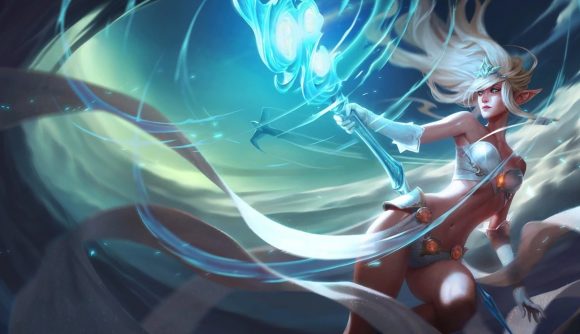 Bot lane can be a cruel mistress in League of Legends’ ranked mode. Sometimes you’re paired up with the second coming of Hong ‘MadLife’ Min-gi on Thresh, but other games will have you questioning whether or not your laning partner is actually a beginner AI. Well, streamer Albert ‘boxbox’ Zheng has now created an actual support bot that is controlled via voice commands in Discord. Meet Bao Bot.

Bao Bot is programmed to automatically lock-in as Janna each game, and is capable of following players around, using abilities, and even utilising active items like Redemption. But simply having a mindless drone following you around isn’t fun, so boxbox has also kitted Bao Bot out with an adorably weeby voice and a slew of voice lines.

For example, if boxbox asks Bao Bot if they’re going to win the game, Bao Bot will respond ‘yes’ or ‘no’ (and occasionally ‘AYAYA’). If boxbox calls Bao Bot over, it responds ‘on my way!’ And, if shit hits the fan and boxbox wants Bao Bot to use all of its abilities to protect him from his impending death, it gets gassed up and yells ‘let’s fucking goooooo!’ before unleashing its payload. Bao Bot even has unprompted voice lines, and will occasionally remind members of the chat to use their Twitch Prime subscriptions.

While calibrating Bao Bot – which appears to be coded using javascript – boxbox has tested it out against other bots in AI games, and has now taken it into normal games with decent success.

Although Bao Bot still needs a bit more tweaking seeing as it doesn’t always execute commands on the first time of asking, it’s great to see that he has a support partner who is always on the same page as him – something many botlaners can only wish for.