Hyper Scape is Ubisoft’s take on a battle royale, but to mark its difference from some of the more traditional games out there, the game has a few little twists. One of those differences is the game-changing events viewers on Twitch can vote for.

Using the Crowncast extension, viewers can impact the game by picking from eight different events that will affect the gameplay in real-time for all the remaining contenders. Four events (Supply Crate, Health Kit, Cooldown Accelerator, and Extra Jump) are common and can be played in a match at any time, but the other four can only be played if there are Twitch viewers watching the match. These events will only be triggered at certain points and more will be added as the season progresses.

Events make it quite difficult for competitive players to go into games with an exact idea on what Hyper Scape hacks or Hyper Scape guns to to pick up or what strategies to use since you have no idea what you might face. So whether you’re a player or an avid spectator, here’s all the Hyper Scape events you might come across in game.

If you’ve not quite managed to upgrade your hacks, then the Cooldown Accelerator event will give you a nice little boost. The event will spawn crystal pickups that reset the cooldowns of your abilities, which are super useful during fights.

You can already scale the highest of buildings in Neo Arcadia with ease, but with the Extra Jump event, contenders are granted an additional two jumps to use. This makes moving from rooftop to rooftop easier, but beware if you think you’ve got the height advantage – you won’t hold it for long. 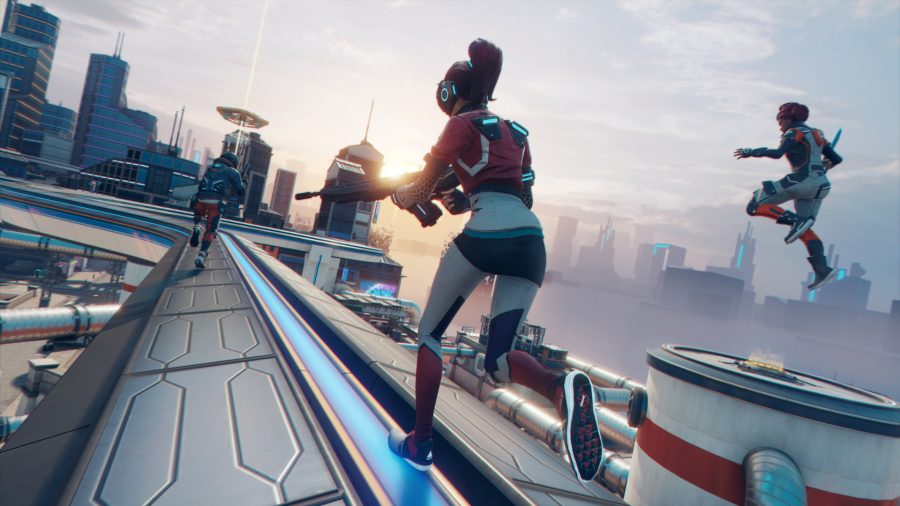 This event will give every contender a speed boost for 20 seconds, which is particularly handy if you’re on the losing side of a fight or need to get out of a decaying area. It’ll also make gunfights hell, so be warned.

If you’re low on health, this event is literally a life saver. Health kits will be dropped all over the map, which when picked up, will grant you a little bit of relief.

There’s nothing worse than running out of ammo mid-fight. Well, with this event you don’t have to worry about that because you can spray and pray with infinite ammo. Here contenders will have unlimited ammo and faster reloaded times.

You’ll want to ditch your guns for this event. The lethal melee event makes hand to hand combat, well… lethal. If you’re not good up close, you’ll want to keep your distance for this one.

This event does exactly what it says on the tin. When this event is live, gravity is drastically decreased and epic mid-air battles usually ensue. This event is probably the most chaotic, but if you keep your cool, you should fare well. It’s also a pretty useful for finding out information and enemy positions.

A supply crate is a little bit like a loadout drop that spawns in random districts across Neo Arcadia. While they contain some pretty good loot, expect them to be hotly contended.

Like the hack of the same name, the Reveal event divulges the position of every single contender for 20 seconds. It’s a bit more useful than the hack and will help you identify if someone’s hiding around the next corner.