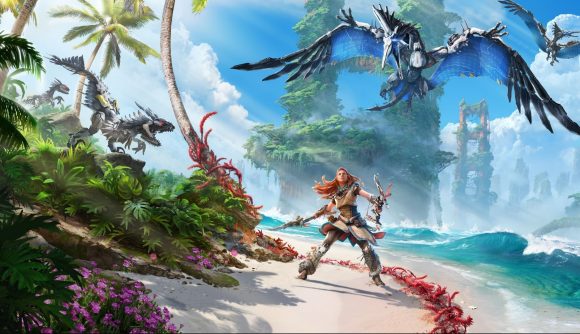 Guerrilla Games’ hotly anticipated title Horizon Forbidden West is set to release in just a few days, and a new PlayStation Blog post outlines the accessibility features the team have implemented into the game. This includes the ability to change in-game settings to more easily obtain loot.

Normally, to obtain certain resources in Horizon, you have to ensure you knock key components from a machine before delivering the coup de grace, or they aren’t dropped. The Easy Loot system allows players to destroy a machine in whatever manner they choose and still gather all of the resources and materials the machine was carrying as if they had carefully detached all components from it before death. This is switched on by default in Story and Easy modes, but also available as a toggle option when using the custom difficulty setting.

Guerrilla Games has gone to great lengths to bring lots of new accessibility features to Horizon Forbidden West. Subtitles, for example, are enabled by default, and you can change the size and background of them, as well as their language independently from the voice acting.

There will be five difficulty modes available, from Story to Very Hard, and you’ll now have the ability to make a custom difficulty mode, where you can change the damage Aloy deals and receives to and from enemies.

In addition, there are a number of controller presets on offer, including one for left-handed players. All controls will be fully remappable and button prompts can be set to press or hold. Similarly, there’s what is called a ‘co-pilot system’ in Forbidden West that allows someone with another controller to have access to the game’s controls at the same time (mirrored to how they were originally set up), which is useful for those that need help to play.

All of this should help as you are taking on the length Horizon Forbidden West mission list, which comprises of both side quests and main story quests.

Other controller features include the ability to use the DualSense’s gyroscope to aim with motion controls, set the vibration intensity during cinematics and gameplay, and toggle the adaptive triggers resistance.

There are also a plethora of gameplay assist settings such as auto heal, auto sprint, aim assist, and whether the game displays climbing annotations to show the player where they can feasibly reach while climbing. Other navigation aids such as the frequency of in-game markers can also be adjusted.

On the audio-visual front, almost everything can be tweaked. The volume levels of certain types of sound – speech or sound effects – as well as the removal of certain sounds that trigger issues like tinnitus, which can happen when using some of the powerful best weapons and best Valor Surges in the game. The ability to tone down the overall volume of noise happening at once for those that are more easily overstimulated.