As we all know by now, Hitman 3 opens with a spectacular set piece in which Agent 47 parachutes onto The Sceptre – the world’s tallest building, located in Dubai – in order to assassinate two high-profile billionaires.

There’s a reason that IO Interactive kicks things off in such a spectacular way, and it’s because Hitman 3 is doing everything that the previous two entries in the World of Assassination trilogy did, but bigger and better. It’s Hollywood Hitman with no expense spared. As soon as you start playing, it’s clear that IO has made improvements to its in-house Glacier engine, and as we noticed in our preview, you find yourself spending hours admiring your surroundings before the thought of murder even creeps into your head.

The opening mission in Dubai is the perfect example: gaze out of floor-to-ceiling windows at the clouds below, the glisten of golden chandeliers reflecting on the glass reminding you that the interior is just as spectacular. But IO’s budget wasn’t just spent on Arabian opulence – from the old money of a Dartmoor mansion to a rave in a Berlin warehouse, every location is distinct, and every environment as interactive as you would expect.

The PlayStation 5 build allows you to explore the world in 4k at a smooth 60fps – and it doesn’t disappoint. The locations, from an Argentinian vineyard to a high-tech lab in Chongqing, are far more than just backdrops though; they are deliberate and intentional sandboxes that inform and affect the way you play.

Every poisonous flower bud you pocket and every antique cannon you accidentally fire has been delicately placed in position, and only Agent 47’s meddling hands will tip the perfect balance of each location to change the course of history and force your target’s untimely demise. 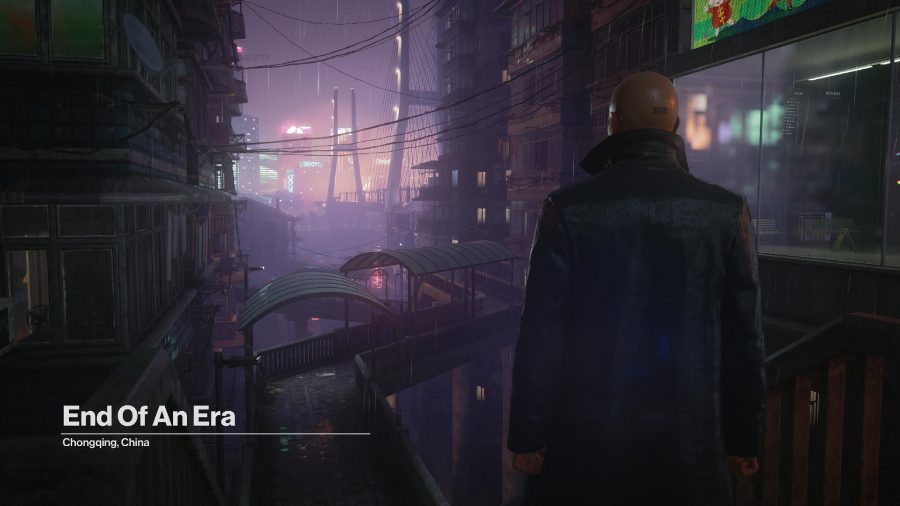 Of course, the game pokes and prods you towards the ‘correct’ way of completing the story mission if you overhear key intel. However, if you decide to do it your way and opt against a simple garroting, IO’s focus on replayability makes going back to each and every location a treat. Agent 47’s new gear, namely a gadget camera that can remotely unlock doors and open new opportunities, as well as take mirror selfies, also adds to the fun. It even offers PS5 players a very satisfying *click* with the DualSense’s haptic triggers, which are otherwise a little underwhelming.

Agent 47 himself is as faceless as ever. His bald head is a blank canvas

Maybe it was my reluctance to use weaponry and urge to figure out the most creative assassinations, but the haptic triggers didn’t fulfill their full potential in my experience. It’s hard not to call this a disappointment, after IO developers were so excited about the haptic feedback when we interviewed them about the game last week. Due to the fact that the majority of the most creative kills come from interacting with environments rather than shooting or throwing – I didn’t use the DualSense’s top-tier triggers all that often in my playthrough. The right bumper, which is used to locate targets, and the square button, which can be used to pacify enemies, got quite the workout, on the other hand.

Perhaps on my next playthrough, I’ll go in all guns blazing to try to feel some weapon feedback in those haptic triggers. And there will be a next playthrough, as Hitman 3 clearly wants you to replay its wonderfully-realised locations to get the full experience.  Location mastery offers experience for completing objectives within levels, and Escalation missions, which increase the difficulty and specificity of your hits, also returns. Hitman 3 also introduces unlockable shortcuts, one-way passages that can be unlocked on one playthrough to permanently alter future attempts. These range from unlocking bolted doors to kicking down ladders, but each offers a new route for 47 to take, and presents new opportunities.

If the sheer volume of options gives you too heavy a dose of analysis paralysis, the PS5’s speedy new SSD might be your saving grace. Using save states can be considered scummy in some circles, but when your console can nearly instantaneously save the game and load up a file in a matter of seconds, it’s like the console is actively encouraging you to save before any major decision and rewind if things go south. It may not be in the spirit of purist assassins, but who am I to argue with the hunk of plastic that has made its home in my living room? 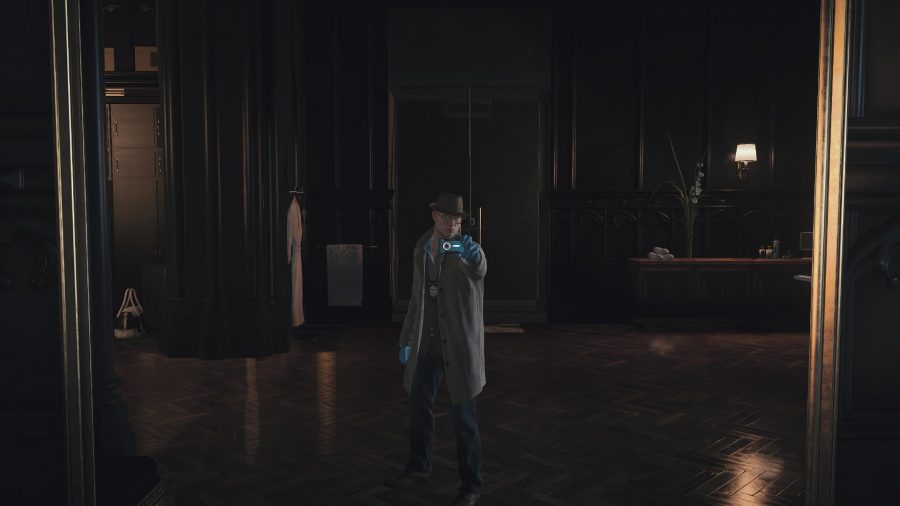 In Hitman 3, Agent 47 finds himself at the centre of the story for once. In the first entry of the World of Assassination trilogy, 47 was a catalyst that forced the story onward, but felt distanced from the events that occurred around him. Hitman 2 changed things somewhat, as 47 explores his past with help from Lucas Grey – and this continues into the third instalment. For the first time, the missions have a personal flavour, and 47 is no longer a pawn in other people’s wars. The story exposition between missions is now fully-animated cutscenes, too, which is a big upgrade from the still frames of previous entries.

There is an inherent absurdity to the Hitman universe

I would recommend that casual Hitman fans read up on the story so far before jumping in as, although there is a nice recap, there are plenty of codenames and acronyms that could be confusing. I won’t give anything away, but I doubt fans of the overarching Hitman story will be disappointed with the culmination of 47’s efforts to uncover his past and look to the future. The final mission takes Agent 47 back to where it all began in Romania, and is a thrilling and fitting finale to a showstopping trilogy.

Agent 47 himself is as faceless as ever. His bald head is a blank canvas, and his disguises paint him as gardners, chefs, and test subjects – but it’s so much more than just putting on the clothes of a cleaner or security guard. In Dubai, 47 is Tom Cruise, his features taking on some rogue handsomeness you hadn’t noticed before. In misty Dartmoor, 47 is Sherlock Holmes minus the deerstalker. In China he’s Mr Robot, in Berlin half of Daft Punk – and his face is just as anonymous as the iconic duo’s helmets. 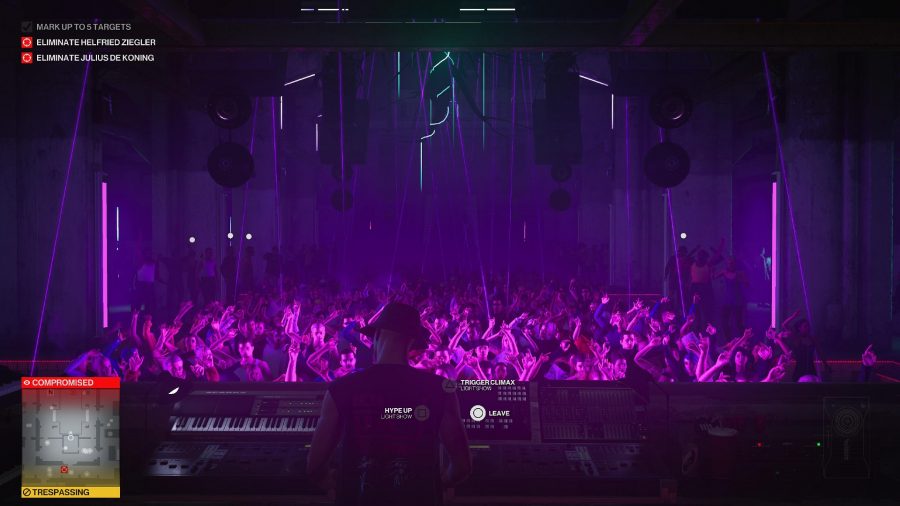 There is an inherent absurdity to the Hitman universe. Guards still pay no attention to two men entering a bathroom stall and one exiting wearing the other’s clothes. Nobody bats an eyelid that the assassin they met a few minutes ago has apparently had facial reconstruction surgery and a severe haircut in the minutes since they last met. Then again, all bald men do look practically identical, so you almost can’t blame them.

If anything, Hitman 3 doesn’t lean into this absurdity enough. As Agent 47 becomes the centre of his own story, some humour is lost. 47 still lives in an absurd universe, where passersby believe he is whomever the namebadge on his clothes says he is, but I can’t deny I miss the flamingo suits and one-liners of entries past. As the mood darkens and things get serious for Agent 47 – well more serious than murder is any other day – he loses some of the dry wit that makes 47 feel a part of the absurd world he inhabits. But ultimately, although Hollywood Hitman may have lost his sense of humour, he’s gained a whole lot more.

Hitman 3 is almost James Bond, almost Mission Impossible, almost Daft Punk, until it isn’t. That is, until you push someone into a grape-crushing machine or poison their marijuana supply and royally mess up their day. And then, well, it’s Hitman.

Hitman 3 builds on the successes of previous entries in the series to create a blockbuster finale to the World of Assassination series. Io Interactive is the best level designer in the business, and next-gen graphics and a twisting story lift Agent 47 to new heights.