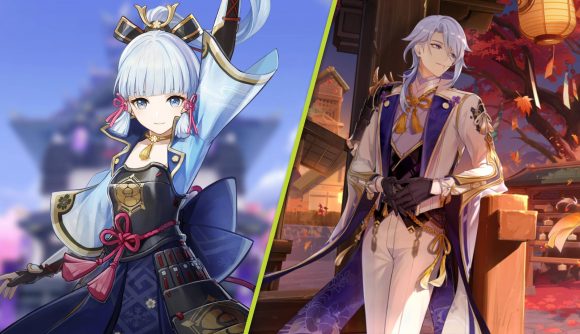 Time really does fly when you’re having fun getting lost in The Chasm, because HoYoverse has today announced that the Genshin Impact 2.6 phase two banner characters are on their way. Alongside Ayaka, who we already knew would be getting her own Genshin Impact banner in phase two, there are plenty of prime four-star units up for grabs, including a certain wolf boy we haven’t seen for quite some time.

That’s right, Razor is finally featuring on a banner for the first time since Kazuha’s release back in June 2021. Razor-wanters have been doing their best cosplay by going feral for the Electro unit in the meantime. Joining Razor on the Ayaka banner are Sayu – last featured on the Hu Tao rerun banner back in November 2021 – and Rosaria – also last seen in November when Eula was released.

The five-star options on the weapon banner this time round are all about forging – sort of. Ayaka’s patented Mistsplitter Reforged sword naturally makes an appearance, with The Unforged claymore getting paired up with it. In the four-star department, The Bell claymore will be lined up next to the Favonius family – that being the Favonius Sword, Favonius Lance polearm, Favonius Codex catalyst, and Favonius Warbow.

Developer HoYoverse has also shared details on two new events coming in Genshin Impact 2.6 phase two. The ‘Vibro-Crystal Research’ event will see you helping out a Fontaine researcher who has made their way to Liyue to “study the harmonic motion between gems known as Vibro-Crystals.”

There are many new upcoming events in the near future, let's take a look~#GenshinImpact pic.twitter.com/InMLRUyBRJ

Meanwhile, the ‘Ley Line Overflow’ event will offer up three opportunities each day to receive double rewards on Ley Lines – so if you’re Wit or Mora-starved, now’s a good time to stock up. Vibro-Crystal Research will take place between April 21 and April 28, while Ley Line Overflow will occur from April 28 to May 5.

With the new Genshin Impact banner upon us, we wish you all the best on your pulls – unless of course you accidentally cashed in all your pity on an accidental Venti pull like a certain staff writer did, and now have to impatiently await the Genshin Impact Yelan release date. It’ll all be worth it, we’re sure.