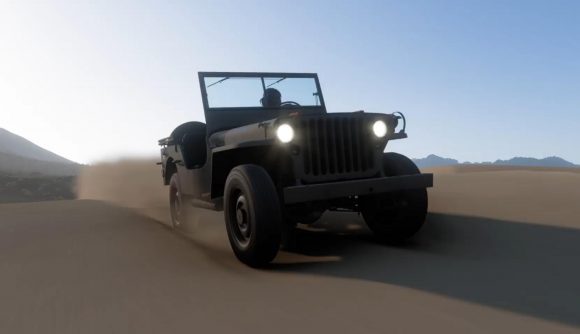 Forza Horizon 5 is now fully released, but thanks to a cunning credits exploit, a surprising car has been making waves and achieved superstar status. A Lamborghini? Nope. A McLaren? Nope. It’s a 1945 Willys Jeep.

Claiming the titles of most popular car and most infuriating car at the same time, this exploit – first reported on by Windows Central – has seen players buying hundreds of Willys Jeeps (one of the cheapest cars in the game at just 40,000 credits), upgrading them just three times to get a Super Wheelspin, and reaping the rewards – which are always worth more than the credits you spent buying and upgrading the Willys in the first place.

However, with the Willys Jeep being, well, pretty shit, players don’t want scores of the old rust buckets kicking around their collections. The solution: pie them off on other players using the Gift Drops system which is unlocked by finding Forza Horizon 5’s Barn Finds.

Built with the intention of being a good way to repurpose cars you no longer want, or to give players some pleasant random surprises, this new feature is now being abused by those who want away with their numerous Willys Jeeps.

With Forza Horizon 5 launching on Game Pass yesterday, and subsequently reaching over 4.5 million players on its opening day, there will be a lot of people snapping up Willys Jeeps looking to turn a quick and easy profit – and plenty receiving unsolicited World War Two-era Jeeps in their inbox.

If you’re looking for a Jeep that is actually decent, check out our best Forza Horizon 5 off-road cars guide.