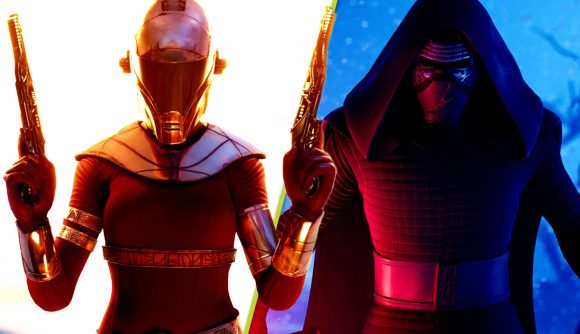 The v20.30 update is here and it looks like several sought-after Fortnite Star Wars skins are set to make a return to the Item Shop for a limited time in the near future. Epic Games has not confirmed the re-release of these Fortnite skins, but data miners have discovered updated storefront assets and updated visual effects for the in-game Lightsaber items. Oh, and they’re adding in a brand-new Lightsaber modelled off of Obi-Wan Kenobi’s weapon.

In 2019, for a limited time, several Star Wars-themed Fortnite cosmetics were added to the in-game Item Shop to coincide with the theatrical release of Star Wars Episode IX – The Rise of Skywalker. For a few thousand V-Bucks, players could get their hands on Fortnite skins representing Finn, Rey, Kylo Ren, Zorii Bliss, and a crimson Sith Trooper.

These Fortnite Star Wars skins and cosmetics haven’t been available to purchase for over two years, last appearing in the Item Shop on January 7, 2020. It’s exciting to learn that we could be seeing this selection of cosmetics making a comeback in the near future. However, we’re not sure when – but there is one date that stands out.

Of course, the date we’re talking about is May 4. While this is commonly known as Star Wars Day (due to the saying ‘MAY the FOURTH be with you’), it’s also the day after the V20.30 update – which is expected to have finalised any changes needed to bring back these skins.

Hypex, a known Fortnite data miner and leaker, revealed this information while discussing the updated visual effects for Fortnite’s Lightsabers.

Lightsabers' effects have been updated but the mythics are not in the files atm, BUT the next downtime update is timed exactly 1 day before May 4th. They might return that day along with the cosmetics & NPC i posted earlier! pic.twitter.com/cASFTGiEWI

You can also check out the updated Item Shop assets below:

Adding to this, a Stormtrooper NPC has been spotted in the game files following the Fortnite 20.20 update. As Hypex has suggested above, this could all come together for Star Wars Day and suggest something a little more substantial is on the way. However, only time will tell.

With the release of several Book of Boba Fett-inspired skins over the last few months, and rumours that Darth Vader is going to make an appearance in Chapter 3 Season 2, it’s clear that the collaboration between Fortnite and Star Wars is far from over. There’s just no telling what Epic Games has planned just yet.

Hypex has also shared the following information, after data-mining the recently-released v20.30 update:

LIGHTSABERS AND STAR WARS WEAPONS ARE BACK!

To add to this, another Fortnite leaker shared this image:

This could suggest an Obi-Wan Kenobi skin is arriving ahead of the Disney Plus show, but we don’t know just yet.

If you’re looking to jump into Epic Games’ battle royale now, though, check out the latest information on the Fortnite Omni Chips locations – it’s worth picking them up while you can.