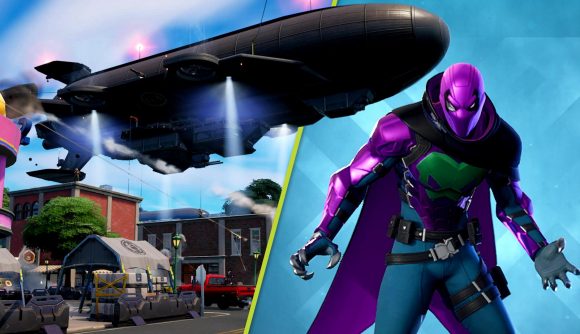 The Fortnite 20.20 update is finally here and things are getting so fierce in the battle between the Imagined Order (IO) and the Resistance that the Condo Canyon IO Blimp has crashed into the sea. The battle between the two has now moved up to Coney Crossroads, but there’s a lot to look out for following the period of server downtime.

We may not be looking at a new season of content for Fortnite, but the 20.20 update is another important stepping stone to an amazing finale for Fortnite Chapter 3 Season 2. In this update, three new crashed blimp locations have been added to the map: Daily Rubble, Coney Collapse, and Canyon Crash.

As these location names suggest, there’s a Crashed Blimp near the Daily Bugle POI and another near Coney Crossroads, just north-east of Tilted Towers. The Canyon Crash location is the most interesting of the three, however, as it has landed quite far out to sea. There’s no telling if players will actually be able to explore it just yet.

These Crashed Blimp locations aren’t the only thing worth talking about from the Fortnite 20.20 update, though. Epic Games has updated the Item Shop assets for Fortnite’s Rise of Skywalker collaboration content – and updated the visual effects for the Lightsaber items. This suggests that the Rise of Skywalker-based Star Wars cosmetics are going to return to Fortnite’s Item Shop around May 4.

In addition to this, Epic Games has introduced the Ranger Shotgun to Fortnite’s growing selection of weapons. This is a single shot break-action weapon that offers a better damage range than other shotguns. We’re not sure it will be able to compete with a sniper rifle, but the Ranger Shotgun could become one of the best Fortnite weapons in the coming weeks.

Epic Games has also updated the in-game menus to reflect the fact that the Prowler skin and cosmetics will be available to unlock via challenges from 09:00 EST / 06:00 PST / 13:00 GMT on April 19.

As for the rest of the update, we just don’t know for sure. Epic Games rarely shares traditional patch notes, so there’s no telling how many more secret changes have been included in the 20.20 update. Voting has already begun at the Funding Stations for Bubble Shields or Balloons, so we’re expecting more content to be released in the coming days. You can also keep track of the latest bug fixes on the Fortnite Trello board here.