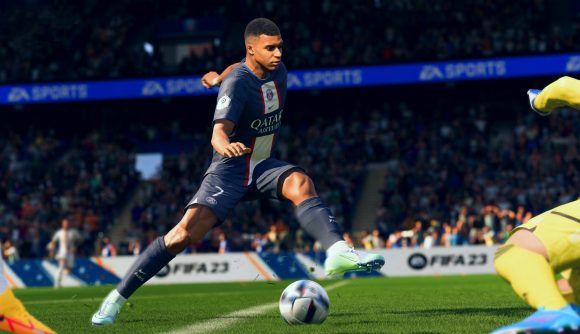 FIFA 23 HyperMotion 2 is the upgraded sequel to the suite of gameplay features released in the previous game, and this year those on current-gen consoles, PC, and Stadia will see their gameplay enhanced to a new level.

While there is always a selection of slickly-named gameplay features or improvements paraded around in the build-up to any new FIFA game, FIFA 23 does have a couple that appear to be rather significant. While things like “Full Team Authentic Motion” and “Composed Ball Striking” appear to be jazzed-up names for ‘new animations’ and ‘better shooting’, there are some features arriving with HyperMotion 2 you’ll really want to pay attention to.

One that could really spice things up is dubbed AcceleRATE. This looks to “create a lot more variety and depth” to the already-important aspect of sprint speed in FIFA 23, according to lead gameplay producer Sam Rivera. While players will still have individual acceleration and sprint speed stats as before (and will still have an overall pace stat on their Ultimate Team cards too), each player will also be assigned an “archetype” that will affect how these stats are delivered. Every player in FIFA 23 will fall into one of three categories: Controlled, Explosive, and Lengthy.

These three archetypes are assigned to players based on a specific equation that EA calculates using a players’ stats for acceleration, strength, and agility, as well as their height.

Explosive players are typically shorter, have higher acceleration and agility stats, and lower strength, and will give you a rapid burst of initial acceleration to beat a player but that will quickly tail off. EA gives Real Madrid’s Vinicius Jr. and Chelsea’s Christian Pulisic as examples.

Lengthy players are taller, have superior strength over agility, and don’t need high acceleration stats, and these players take a while to get going initially but have high top speeds in order to catch up to players ahead of them. Virgil van Dijk is listed as the example player for this.

If a player doesn’t fit into either of these categories, they are simply assigned the Controlled archetype, and will accelerate in the kind of way you’re already used to in FIFA. This would be a player like Son Heung-min, according to EA.

So while you’ll of course still be wanting to throw some 90-pace wingers into your Ultimate Team, it may be worth checking their archetype to fit the playstyle you want.

Dribbling is also getting some improvements in HyperMotion 2. Rivera admits that dribbling in FIFA 22 could often feel “slidey” with players “skating” when they attempted to turn. In FIFA 23, players will be more “grounded” and the dribbling system will be “more responsive” overall.

EA has clearly latched onto two other big bits of gameplay feedback from FIFA 22, and has two new features based entirely around them.

The first is ML Jockey, which will hopefully see an end to very strong and samey jockeying and blocking animations. These animations will now be replaced with “machine-learned” ones based on EA’s 11v11, real match capture events using those fancy Xsens suits.

The second looks to address the clumsy interactions between players and the goalkeepers in situations such as crosses and corners. All players now have better “awareness” of each other in these scenarios, according to Rivera, which should lead to less of those annoying collisions and aerial fouls.

Now these are all changes that only players with HyperMotion 2 will experience, those being players on PS5, Xbox Series X|S, Stadia, and PC. There are general improvements and new features across the board for both current-gen and last-gen versions of FIFA 23.

The most notable is power shots, which take up the L1+R1/ LB+RB action that has housed low driven shots for the last few games. The animation for these takes a long time to wind up, so you’ll need some space on the pitch, and the aiming will be completely manual, so you’ll need some accuracy too. If you’ve got both of those things though, you can unleash a super powerful shot that, if placed well, will be hard for keepers to stop.

Set pieces also look a bit different now, with a new system for getting dip, power, and curve on corner kicks and free kicks.

There are plenty of new pass animations now as well, which includes what we are now dubbing the ‘ass pass’ – yes, you can knock the ball to a teammate with your backside in some situations.

While that’s not an exhaustive list, those are all the major FIFA 23 gameplay changes, improvements, and new features you should be really keeping an eye out for. To dive into the real nitty gritty and see all the changes, check out the full Pitch Notes article here. For more info on when you can experience this new gameplay, check out FIFA 23 early access and FIFA 23 release date guides.