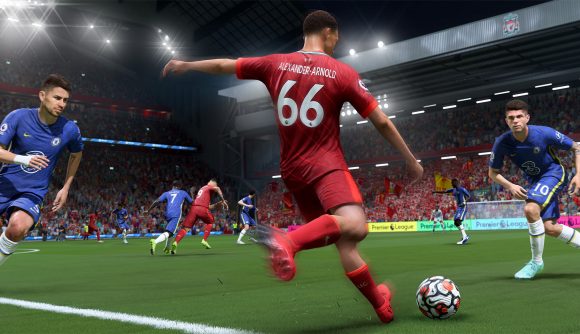 Our very first Premier League Player of the Month SBC has arrived in FIFA 22, and to be honest things couldn’t have got off to a bigger start. That’s because the POTM is none other than Cristiano Ronaldo.

Despite us being only a couple of weeks into the FIFA 22 cycle, Ronaldo’s form for Manchester United earned him a nomination for the Player of the Month award, and with the eventual winner coming down to a fan vote, Ronaldo was always favourite to come out on top. For his POTM card, Ronaldo is bumped up to a 92-rated striker, capable of dismantling any defence.

However, there’s a staggeringly large cost to pay for acquiring such a great card this early into FIFA 22 Ultimate Team. To obtain POTM Ronaldo, you’ll need to complete 26 SBCs, ranging from 84-rated to 89-rated squads. We’ll repeat that for you just one more time for dramatic effect: 26 SBCs.

Within that group, four of them require 89-rated squads – a tall, and expensive, order. Even when using FIFA 22’s cheapest high-rated players, getting your hands on POTM Ronaldo is going to be a pricey undertaking.

We’re yet to run exact maths, but we’re estimating somewhere in the region of 2 – 2.5 million coins will need to be spent on players to complete all of these challenges. What makes things even more challenging is that you have only two weeks to get the players and coins together to complete this SBC group.

We’re also trying to look at past records to verify this, but 26 squads may be the most ever for an SBC group for a non-Icon player. For context, Moments Pele’s SBC in FIFA 21 asked for 29 squads.

You can see the full POTM Ronaldo SBC group and requirements over at FUTWIZ.

This is an astronomical amount of players and coins needed for the first Premier League POTM and we’d be surprised if many complete it given we’re just a week on from the FIFA 22 release date.