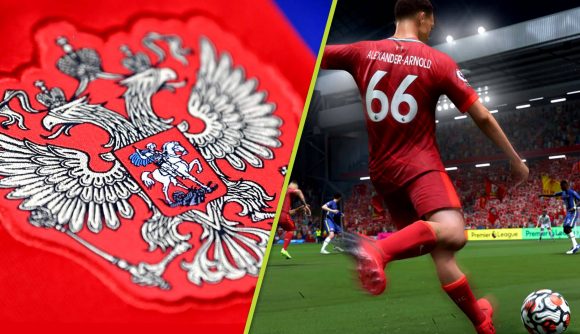 As growing pressure mounts on companies around the world to cut ties with Russia following its invasion of Ukraine, EA has announced that it intends to remove all Russian clubs and the national team from all FIFA products, including FIFA 22. While not explicitly stated, this should also mean removing Russian club items from Ultimate Team. The news that EA would be removing Russian teams from its games confirms earlier leaks by Tom Henderson.

Currently in FIFA 22, the Russia’s men’s national team and three Russian Premier League clubs are in the game. The entire Russian top flight used to be in FIFA’s series, but the licence for the league was exclusively acquired by Konami for use in Pro Evolution Soccer in 2018. Right now, CSKA Moscow, Spartak Moscow, and Lokomotiv Moscow are the only Russian clubs in FIFA.

This move from EA will not only affect FIFA 22, but also FIFA Mobile and FIFA Online. The statement makes no mention of Russian players competing in other leagues being removed.

In the statement, EA says it stands in solidarity with the Ukrainian people and “calls for peace and an end to the invasion”. It also says that this brings EA in line with its partners at FIFA and UEFA, who earlier this week banned the Russian national team and Russian clubs from competing in their competitions.

There is currently no timeline on when these removals will be made in EA’s FIFA titles.

As well as the removal of Russian teams in FIFA, EA is also taking Russian and Belarussian ice hockey teams out of NHL 22.

There has been mounting pressure for the videogames industry to take action following Russia’s invasion of Ukraine. A Ukrainian politician earlier today called on companies like Sony and Microsoft to make its services unavailable in Russia. Esports tournament organiser BLAST also banned Russian teams from its upcoming CS:GO events.