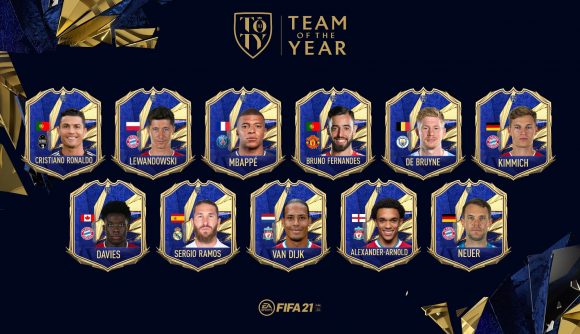 EA Sports has unveiled its fan-voted Team of the Year for FIFA 21 – and there’s a massive omission. While TOTY staples such as Cristiano Ronaldo and Sergio Ramos are featured, for the first time in FIFA Ultimate Team history there is no Lionel Messi in the TOTY.

Joining Ronaldo in attack with delicious blue cards instead of Messi is Robert Lewandowski and FIFA 21 posterboy Kylian Mbappe. In the three-man midfield, Premier League duo Kevin De Bruyne and Bruno Fernandes star alongside Joshua Kimmich. The back four sees Sergio Ramos and Alphonso Davies next to Liverpool teammates Virgil van Dijk and Trent Alexander-Arnold. This year’s goalkeeper is a Manuel Neuer – a surprise considering the likes of Alisson and Ederson were in the mix.

While it certainly feels strange not seeing Messi in a healthy hue of blue, this is certainly a stacked TOTY and it will only get more impressive as the stats of each set of players are released throughout the next week.

The first batch of players to drop for Team of the Year will be the attackers, and Ronaldo, Lewandowski, and Mbappe will be available in packs from this evening.

According to the EA Sports FIFA Twitter account, over 10 million votes were cast for this year’s TOTY from 185 different countries.

The people’s champions. 🏆
Over 10 million votes from 185 countries.
Introducing your Team of the Year.#TOTY #FIFA21 pic.twitter.com/vQFiDwckSq

If you’re looking to get your hands on some packs to try your luck for a blue, we suggest grinding some Squad Building Challenges. For that, you may find our list of the cheapest SBC players rather handy.