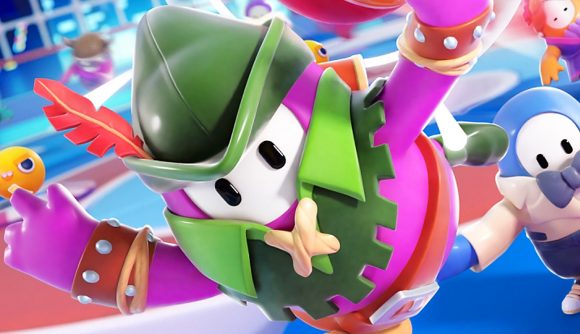 Fall Guys has had quite the couple of weeks. Within just 48 hours of the hit party game going free-to-play there were over 20 million people furiously chucking themselves through its various rounds. Now, developer Mediatonic has announced via Twitter that it has now reached the 50 million mark – an unprecedented feat.

In fact, the feat is so unprecedented that the developer says that it’s in “absolute disbelief” that there are now 50 million beans running around the place. Fall Guys made the jump to a free-to-play model towards the end of June, and simultaneously launched on a host of new platforms, including Nintendo Switch, PlayStation 5, Xbox One, and Xbox Series X|S with full cross-play support.

Since then, Fall Guys fever has swept the internet in a similar fashion to its initial release back in 2020. Though its Twitch viewership has yet to return to the lofty heights of those first few weeks, Twitch Tracker has recorded a peak of nearly 120,000 concurrent viewers since June 21, with an average viewership of 87,000 throughout July so far.

Even on Steam, where the game hasn’t been available since Epic Games pulled it after buying out Mediatonic in 2021, the numbers hopping on have been plentiful. Since the update, the Fall Guys has hit its highest peak on the platform since October 2020.

Needless to say, going free-to-play and launching on new platforms has been a roaring success for Fall Guys so far, though once again we’ll have to see if its popularity can persist.

If you’re trying to figure out who (or what) to rep for your next show, check out our Fall Guys skins guide,