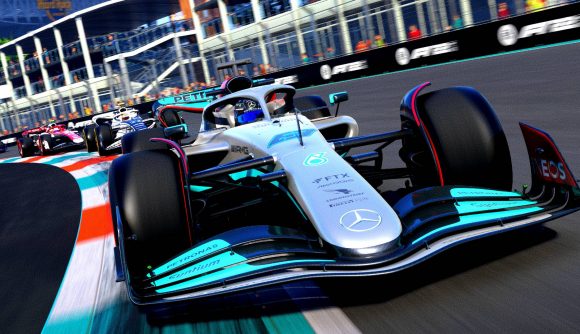 We know racing games aren’t always about winning, but finishing on the podium in Formula One is the ultimate prize and F1 22 isn’t changing that. With expectations that F1 2021’s ‘rival’ system is returning to MyTeam, and fierce wheel-to-wheel multiplayer racing confirmed, it’s important to finish in a competitive position no-matter what. However, if you really want to show up the over drivers on the grid, you can – and the F1 22 trophy list contains an achievement that’s asking you to do just that, which seems nigh-on impossible in a standard race.

What achievement on the F1 22 trophy list are we talking about? Well, Codemasters’ latest official Formula One racing game is asking players to “while in 1st place, lap the driver in 2nd place in any game mode” for the Annihilation trophy.

Yeah, you read that right. F1 22 wants you to work towards a race lead that’s so dominant that you actually lap every other car on the track. It’s something that sounds, quite frankly, impossible, but how impossible is it?

Well, in a matter of fact, it might be a little easier than it looks – depending on the game mode you’re playing on, of course. At the moment, ahead of the F1 22 release date, the trophy (which can be found on the exophase database here) does not specify the game mode players need to be playing to earn the Annihilation achievement.

This means that, in theory, you could earn this trophy in a MyTeam career mode race, in an online multiplayer lobby, or in an ‘instant action’ style Grand Prix.

F1 22’s new Adaptive AI system may make this difficult to achieve with a computer-controlled grid, but the right online multiplayer lobby may just make this doable. However, a lot of the time, in F1 2021 anyway, these lobbies only offer up short races made up of around five laps. As fast as you can take corners in a Formula One car, it’s not going to be easy to get a full lap’s worth of time ahead of everyone else out there – and then you have to get past them.

There are a total of 51 achievements on the F1 22 trophy list and almost all of them should be obtainable through natural gameplay. However, there are a couple, like the above, that may need some work.