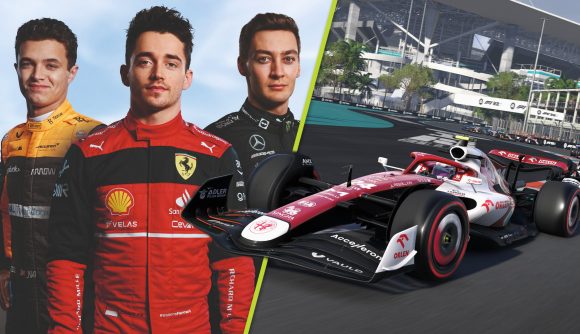 Ahead of this weekend’s Miami Grand Prix, fans of the F1 videogame series have been treated to some early gameplay footage of the new F1 22 game. Several content creators and sim racing stars have been belting round the new Miami circuit in F1 22, and have noticed a significant change: Jeff is gone.

For those unfamiliar with Jeff, he has been your race engineer for several previous iterations of the F1 game. While he is meant to be there as a reassuring and informative voice as you go wheel to wheel out on the track, Jeff has become one of the biggest memes in sports games history. Thanks to a combination of memorable voice lines and certain interactions making next to no sense, Jeff has become a loveable yet infuriating character. However, for F1 22, Codemasters and EA have killed off Jeff in favour of a new race engineer.

Many in the community have expressed relief that they’ll never have to hear Jeff’s snarky “Are you OK?” after hitting the barriers ever again, but there are plenty that are mourning the loss of this F1 game icon.

While we’re unsure of this new race engineer’s name, content creator ‘aarava’ claims that he is being voiced by Marc Priestly. Priestly once served as a member of McLaren’s pit crew during the 2000’s, but has gone on to become a writer and broadcaster covering Formula 1.

The new engineer’s voice lines have also apparently been captured on the actual microphones used by pit crew right now in Formula 1, instead of the rather scuffed microphone Jeff used to yell down…

Wondering how it feels to push at 320 km/h down the streets of @f1miami? We’ve got you covered, courtesy of @Charles_Leclerc’s @scuderiaferrari 🏎️ pic.twitter.com/tmPDB7KZEp

While there are gameplay changes to get excited for, like having to manually line up on the grid or perfectly time turning into your pit box for a tyre change, the loss of the late, great Jeff the Engineer, arguably eclipses them all.

The F1 22 release date is less than two months away now, so it won’t be long before you can get stuck into the new game and get used to Jeff 2.0.