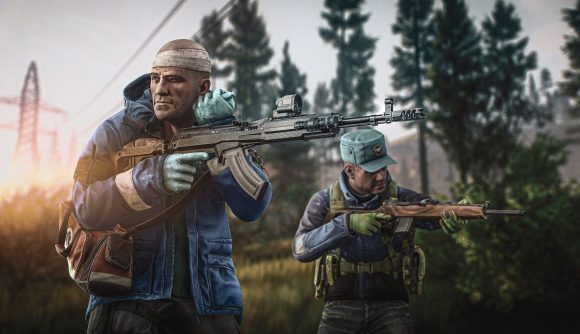 Have you ever listened to Rasputin by Boney M. and thought: ‘This would make a banging Escape From Tarkov tune? Well, content creator ‘Axel_TV’ has and, well, he’s not wrong.

Using a variety of sound effects from the game from weapon reloads, kicking down doors, looting sound effects, gunshots, PMC cries, and Tushonka chomping sounds, the beat to Boney M’s 70s banger has been painstakingly created in this hardcore looter shooter. It’s so good that developer Battlestate Games has given it the seal of approval on Twitter.

The accompanying music video, which you should absolutely watch below, even features one of the most terrifying Escape From Tarkov bosses, Tagilla, smashing the living daylights out of someone with his sledgehammer, all in the name of good music. Honestly, it’s an absolute hoot and it’s stuffed full of Escape From Tarkov memes, making it a must see for anyone waiting for their queue to load the god damn loot.

Axel_TV, who usually pushes out EFT gameplay content, says he was inspired by an Arcane cover of the song, which features many League of Legends characters bopping along to the cult classic.

Surprisingly, this isn’t the first Escape From Tarkov music video to hit YouTube. Drum and bass DJ ‘John B’ has long been creating songs about the game and they’ve proved so popular that he’s actually performing his latest song, I Gotta Fever (For the Lightkeeper), at TwitchCon in Amsterdam.