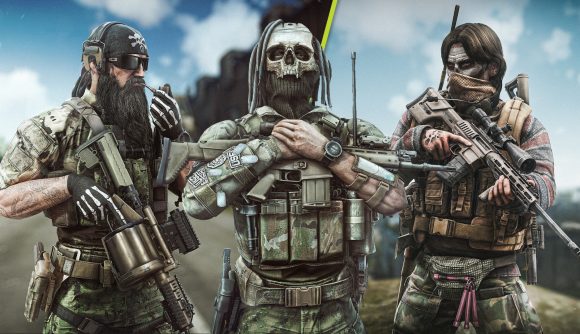 Lighthouse is by far one of the toughest Escape From Tarkov maps in the game. With high-tier loot areas guarded by the likes of Rogues – well-armed AI players – getting out with your ego in tact is pretty tricky business. However, it looks like things are about to get a whole lot trickier thanks to three new Escape From Tarkov Lighthouse bosses.

Enter Big Pipe, Knight, and Birdeye. Battlestate Games has just teased these gnarly looking chaps, and although we don’t know much about them, we do know that they’ll join the Rogue forces as bosses when the Lighthouse expansion eventually drops. It’s been rumoured that all three will be patrolling the Lighthouse and Water Treatment area, which is where the new in-game trader will be stationed.

And well, if they are going to be stationed there, things are going to get interesting. Big Pipe, who looks a lot like Rainbow Six Siege‘s Blackbeard, is backing a Milkor M32 six-shot grenade launcher, Knight has a well-specced SCAR-H, and Birdeye has two guns – although it’s the RSASS with the huge scope you’ll need to be worried about.

In other words, these three Lighthouse bosses can do everything – short range, long range, everything. They’re going to a be a nightmare to deal with, especially since it appears they’re going to be part of a squad of four protecting this trader.

What that fourth boss looks like, though, remains to be seen.

It’s not clear when these update will drop, but with the next Escape From Tarkov wipe just around the corner, who knows what could be in store. One thing’s for sure, though, your usual Lighthouse raids are about to look a whole lot different.