Elden Ring hasn’t been out for long, but players have already gotten a pretty good idea of which weapons are overperforming, and should be built around to absolutely decimate the Elden Ring bosses. Perhaps the most notorious (and for good reason) is the Sword of Night and Flame build.

This impressive straight sword – which deals physical and either magic or fire damage – boasts one of the best weapon skills in the game: Night-and-Flame Stance. While using it, players can choose to either shoot out a concentrated beam of magic, dealing devastating single target damage, or a sweeping flame attack that burns all in its path. Speedrunners have already taken to this weapon like moths to a flame during their initial routing efforts, so if it’s good enough for the pros, it’s good enough for the rest of us.

The Sword of Night and Flame build requires choosing one of the sword’s main scaling stats to invest heavily into. While classes typically don’t matter in Elden Ring beyond the early levels, there is one which lets you reach this monstrous weapon’s minimum requirements quicker than the others. The best class for a Sword of Night and Flame build in Elden Ring is the Confessor. 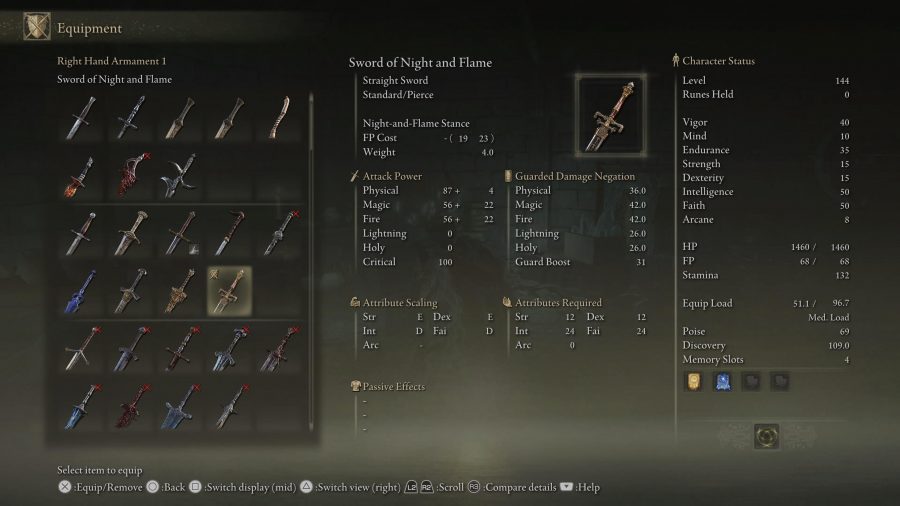 The Sword of Night and Flame has four different stat scalings: Strength, Dexterity, Intelligence, and Faith. Requiring just 12 Strength and Dexterity to wield, the Confessor’s base stats perfectly meet those criteria. This gives a much more straightforward levelling path towards the much meatier 24 Intelligence and Faith needed to operate the sword.

With just 25 stat points required to reach the minimum requirements, the Confessor will be able to use the sword properly at level 35 (without stat-boosting effects from talismans or Great Runes).

Here is how the Sword of Night and Flame’s scaling evolves as it’s reinforced with Somber Smithing Stones.

With the single-target beam’s damage scaling with Intelligence, and the flame wave with Faith, you should prioritise one or the other depending on which part of the Night-and-Flame Stance you prefer. We personally feel that the beam is where this sword truly shines, so would recommend opting for Intelligence. You’ll also want to dip into Mind to increase your capacity to utilise Night-and-Flame Stance by bolstering your FP.

So what order do you want to level your stats in? Well, step one should be boosting your Vigor into the mid-20s to survive the early game – particularly if you’re a less-experienced player. From there you should be looking to meet the sword’s minimum requirements.

Once you have the necessary stats (if you do choose to level Vigor you should be around level 50), work on getting your Mind to 20 as you start levelling the weapon. Beyond that, get either your Intelligence or Faith (depending on which part of the stance you prefer using) to the soft cap of 60.

For example, by level 100 a Confessor build prioritising the sword’s beam should look something like this:

Although the sword by itself should trivialise a lot of the content in Elden Ring, we would also recommend throwing a few points into Arcane so you can make use of some of the incredibly potent dragon incantations made available by offering Dragon Hearts at the Cathedral of Dragon Communion – especially Rotten Breath.

There is some flexibility in how you level stats based on the talismans you’re using. If, perchance, you have the Stargazer Heirloom which raises your Intelligence by five, then don’t be afraid to allocate those extra points into Mind for more lasers.

And there you go, the best Sword of Night and Flame build there is in Elden Ring right now. Now your stats are distributed optimally, may the Erdtree have mercy on your foes as you cleave through them with one of the top rankers on our Elden Ring weapon tier list. You might want to consider our recommendations, especially if you’re working your way through our Elden Ring boss order list.